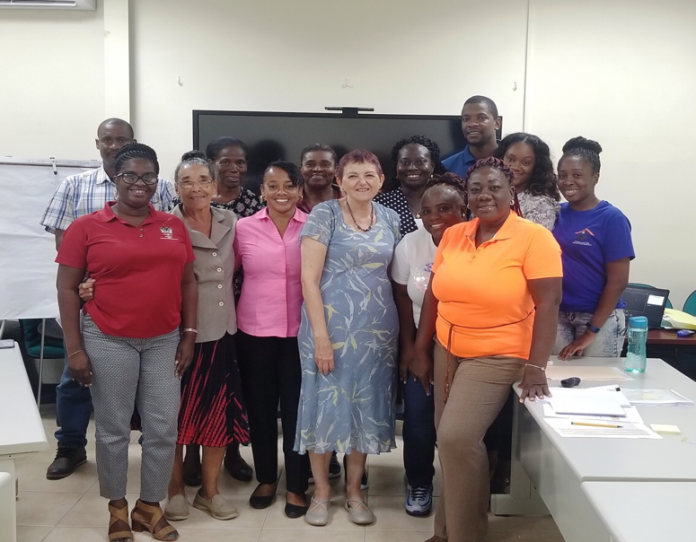 The Federation’s youth will soon benefit from the improved operationalization of the Child Justice Act, according to a spokesperson for the Department of Social Services following a visit by consultant Ms. Lucy Dawes, who met with officers of the Probation and Child Protection Department (PCPS), the Department of Social Services in Nevis, and other stakeholders during a two-week period Sept. 2-13 to assist them in putting in place the changes required by the Child Justice Act.

The Act, which was passed in St. Kitts-Nevis in 2013, replaced the Juvenile Justice Act, which set the age at which children could be charged and convicted for an offence beginning at age eight (8). The Child Justice Act (2013) increases the age of criminal responsibility to age twelve (12) and includes more child-friendly measures such as outlining how youth offenders between the ages of twelve to eighteen (12-18) are to be best assessed, managed and provided with opportunities for rehabilitation and reintegration into society.

Ms. Dawes noted that while the Act was passed in 2013, many of its tenets still needed to be instituted in the day-to-day management of young offenders, and that the series of workshops would help to change that.

“I’m here to assist in writing manuals for the Probation and Child Protection officers to use, which will take the law and put it into practical day-to-day guidance for their work. We are looking at the Child Justice Act, to now make it a reality…so we will look at what stakeholders will need to do and what changes will need to be made,”she said.

A former Director of the United Kingdom’s Youth Justice Board, Ms. Dawes also noted that the workshops and the Procedural Manuals that would be created as a product of the sessions, will help Probation and Child Protection officers with case management and investigation.  The Manuals would also assist in the assessment of children for diversion, or providing alternatives to going through the Court system for an offence.

“Diversion gives children the opportunity to make a mistake, and to make amends for that mistake, and not end up in the criminal justice system….as well as get the support to do positive things with their lives,” she said.

Acting Director of the Probation and Child Protection Services Department and participant of the workshops, Mr. Gerald Connor, disclosed the Department did not have many stand-alone diversion programmes, but that they were actively seeking to partner with local agencies, clubs, and youth organizations to explore what options existed for children to be rehabilitated after an offence.  He added that the current training would help them to determine the best ways of doing so, in order to help youth offenders to be able to ‘turn their lives around’.

Ms. Ruby Thomas of the Federation’s Probation and Child Welfare Board, which oversees the work of its probation officers, said that the sessions were very interactive and encouraging, while Acting Senior Child Care officer, Mr. Naren Maynard, remarked that the workshops were extremely helpfuland that he hoped that they would be able to put the needed changes into practice as soon as possible.

Child Protection Officer of Nevis, Ms. Udora Liburd, also commended the training, noting that it was “filled with good information, and enjoyable”:

The Procedural Manuals are expected to be completed and turned over to the Ministry of Community Development, Gender Affairs and Social Services by early October.

As the Child Justice Act (2013) provides guidance to major stakeholders in the area of youth care and empowerment, several other officials attended the training, including representatives from the education, medical and religious sectors, the Gender Affairs Department, and the New Horizons Rehabilitation Centre.

Local organizations that wish to be considered as providers of juvenile diversion programmes with the Ministry of Community Development, Gender Affairs and Social Services may register at the following OECS web address: https://survey.us.confirmit.com/wix/3/p3091073653.aspx., to be evaluated.