Two St. Kitts based NGOs have become the first in Latin America and the Caribbean to receive funding under the Republic of China (Taiwan)-funded Women Employment, Entrepreneurship and Financial Inclusion Project that was launched in November last year.

Resident Ambassador of the Republic of China (Taiwan), His Excellency Michael Chau-Horng Lin, made the announcement on Friday October 21, during an agreement signing ceremony held at the National ICT Centre, to provide funding for projects being undertaken by the two NGOs, Tab SKN Ltd, and Lake Health and Wellbeing.

“It is worth mentioning that among the eight countries with the Women Empowerment Project in Latin America and the Caribbean, they are the first ones to get approval from our Headquarters,” revealed Ambassador Lin. “With different approaches, they will be important parts of advocating for women’s empowerment in the Federation in public health and media and culture sectors.”

He noted that the two NGOs proposed to organise lectures of NCDs self-management for women with NCDs, and vocational training courses for women with low income, and provide a platform for participants to share their journey towards entrepreneurship. He added that those initiatives seek to showcase how women contribute to the development of different sectors of the society.

“I would like to wish Lake Health and Wellbeing, and Tab SKN every success in undertaking these initiatives as the pioneers of bringing about true gender equality and sustainable development in this country,” said Ambassador Lin in his closing remarks.

Junior Minister in the Ministry of Social Development and Gender Affairs et al, the Hon Isalean Phillip in welcoming the awardees of the funding said it was a great opportunity as it would help to stimulate the NGO sector and to support the work that Government is doing when it comes to women’s empowerment.

She said she was sure that both the NGOs would deliver, do the work and be able to accomplish the outcomes that they would have registered as part of their projects.

The projects are ‘Hustle and Grow’ implemented by Tab SKN Ltd under the leadership of Mrs Gardenia Destang Richardson, and ‘Empowering Women Living with Non-communicable Diseases (NCDs)’ to be executed by Lake Health and Wellbeing through its Programme Director Mrs Abi Begho.

“Special thanks to the Ambassador – it is always a pleasure – and to the Taiwan ICDF for actually providing this opportunity through this funding,” commented Hon Phillip. “It is an opportunity for us to stimulate the NGO sector and to really develop that sector especially as we seek to deliver social services and social development programming.”

In further expressing her gratitude, she pointed out: “Government cannot do it by itself and so we are really grateful for the opportunity to help to facilitate that through the Department of Gender Affairs and the Ministry.”

The signing ceremony was chaired by the Director, Policy Planning and Projects Unit in the Ministry of Community Development et al, Ms Azila Clarke, who observed that earlier this year the Taiwan Technical Mission gave notification to the Ministry that they would be able to now support a Women’s Empowerment Contest which was open to groups and organisations in the Federation to come up with unique ideas around community based initiatives.

The contest was launched on March 25 this year, and had 12 community based organisations responding.

“The top three that complied with all contest regulations were invited to make a pitch to a panel of persons within the public and private sector, as well as the Mission and Embassy,” said Ms Clarke. “Today we are here to sign the agreement for the two successful organisations, Tab SKN Limited, and Lake Health and Wellbeing.”

Signing on behalf of the Technical Mission of the Republic of China (Taiwan) to Saint Kitts and Nevis was Mr Yu-Ming Lu who is the technical lead for the Taiwan Technical Mission. Facilitating the smooth flow of documents being signed was Manager of Women Empowerment Project, Mr Andrew Tseng Kuo, who was assisted by the Technical Mission’s Agriculture Project Officer, Mr Kyle Huang.

Also present at the signing ceremony were the Permanent Secretary in the Ministry of Social Development and Gender Affairs, Mrs Janelle Lewis-Tafari, Director of the Department of Gender Affairs on St. Kitts, Mr Virgil Jeffers, and Ms Grace Wang, the Secretary at the Embassy of the Republic of China (Taiwan). 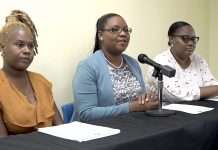