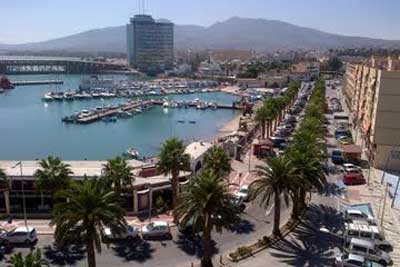 by Eric Lamb
MELILLA, SPANISH MOROCCO: It was just after eight in the morning when I finally switched off the motorcycle’s engine and decided to stretch my legs. The day was already humid, but not yet uncomfortable. To the southwest, ominous dark clouds were massed over the Rif mountains, while, from the northeast, a gentle breeze was coming in from the Mediterranean sea.

My crossing from Africa to Europe had taken just over an hour and a half; not, as most would assume, across the straits of Gibraltar, but through a reinforced steel gateway which formed part of a border fence-over six miles long, 18 feet high, and topped with razor wire-separating two very different worlds: the kingdom of Morocco, from where I’d just come, and the autonomous Spanish enclave of Melilla, from where I would continue my journey by ferry to the Spanish mainland. The contrast was evident everywhere I looked: the modernistic architecture, European-style shops, well-tended parks, and litter-free streets.

And, just as in Morocco, there was a lot of history here.
The site of present day Melilla, according to archaeologists, was first settled around 300 B.C. Over the centuries, it gained strategic importance under the successive rule of the Phoenicians, Greeks, Romans, Muslims, Portuguese, and, from the late 15th century onward, colonial Spain

The first Spanish structure of any permanent significance was the fortress. Today, traces of the original settlement, along with a military museum (and a museum of archaeology) are located within its walls. The modern city extends to the south and west, with the Mediterranean sea and the port on one side, and the Moroccan hills on the other. Interestingly, the original boundaries of Melilla (which has an area of only 12 square kilometers, or 4.6 square miles) were defined not by survey, but by the distance traversed by a cannonball fired from this fortress.

During the rule of the dictator Francisco Franco, Melilla’s primary means of defence against incursions by hostile Berber tribes, and others, consisted of the now-defunct Spanish Foreign Legion, an elite military force which also had a presence in the Spanish Sahara, Equatorial Guinea, and a number of coastal islands, notably Fernando Po.

Relations between Spain and Morocco have been largely peaceful in recent years, although Morocco steadfastly views the Spanish enclaves as territories under illegal occupation. The Spanish government’s own position is that Ceuta and Melilla were established centuries before Morocco gained its own independence from France in 1956; therefore, there can be nothing to discuss.

There have been, however, occasional periods of tension: in 2002, when a handful of Moroccan military personnel briefly occupied Perejil, a nearby uninhabited island claimed by Spain, and in 2007, when King Carlos II paid an official visit to Ceuta and Melilla-an act which was immediately denounced by Morocco’s own king, Mohammed VI.

As a consequence of being part of Spain, Melilla is also part of the European Union-and thus subject to comparatively liberal EU laws regarding human rights and freedom of movement. This, in turn, has made Melilla a target of choice for untold thousands of economic refugees, most from sub-Saharan Africa, in search of a better life. In 2005, after hordes of would-be asylum seekers, many carrying homemade wooden ladders, stormed Melilla’s border fences en masse (700 made it across in a single night; 6 died), the Spanish government decided to spend an additional 33 million Euros to bolster fortifications along its border. Even the use of drone aircraft was reportedly under consideration.

Despite such tragic events-and perhaps paradoxically-Melilla’s common border with its neighbor has also brought huge rewards for some, especially wholesalers and traders. Row after row of bustling warehouses, some within yards of the border, are ample evidence of just how important commerce has become for both countries. From one side, there’s tea, carpets, beeswax, spices, fruits and vegetables, goat skins, and handicrafts. In the other direction, car parts, bottled water, toilet paper, home accessories, used clothing, even liquor. Each day, a half million Euros or more is estimated to change hands.

But not everyone receives a fair share of the bounty. One compelling reason for this is the fact that per capita income of most Melillans is a staggering fifteen times that of their Moroccan counterparts, which translates to a virtually bottomless pool of cheap labor. And, with it, exploitation.

One of the most glaring examples, to me, at least, involves the use of porteadoras, or “Mule Women”. Each morning, dozens of Moroccan women cross into Melilla through a pedestrian gate known as the Barrio Chino. Most are single mothers, widows, or have escaped from unhappy (and often prearranged) marriages. All have something in common: they’re desperately poor, have a hungry family to feed, and can’t find decent employment.

Yet, in a macabre twist of fate, these same women (and a few men as well) are eagerly sought out, even fought over, by the jostling crowd of merchants and traders on the Spanish side of the gate. The reason: they need to get their goods as quickly as possible to their customers on the Moroccan side. If the Mule Woman is a resident of Nador, the Moroccan city/province adjacent to Melilla, she won’t have to pay import duties on most goods she brings into Morocco. But there’s a catch: the merchandise has to be physically carried across the border. Which means, basically, on their backs.

And the loads that some manage to carry can stagger the imagination: anywhere from 100 to 200 pounds, held in place by a head strap, often so heavy that the porteadora is stooped almost double. You can almost hear her teeth grinding and joints popping. Yet she, and others like her, will continue to go through this ordeal, day after day, because she has no choice.

Her reward? On average, 3 Euros, or about 4 US dollars, per trip.

Out of consideration for their dignity (and mine) I took no images of the porteadoras, which is why none appear with this article. But, in my mind’s eye, the scene is as vivid as yesterday. And, for me personally, deeply disturbing.

Maybe, I sometimes tell myself, I should begin to accept that my own values aren’t necessarily those of others, especially in such a multicultural world. You can’t always choose what you see.