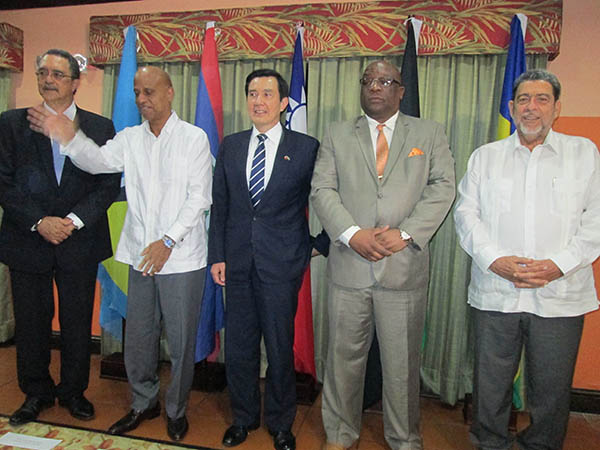 From Ms. Valencia Grant, the Press Secretary to the Prime Minister of St. Kitts and Nevis
Cahal Pech Room, Radisson Fort George Hotel, Belize, Wednesday, March 16th, 2016 (6:30pm) – Prime Minister of St. Kitts and Nevis, Dr. the Honourable Timothy Harris was one of four Caribbean prime ministers who met with President Ma Ying-jeou, the leader of the Republic of China (Taiwan).
The prime ministers commended the president for his contributions while in public service, particularly as they relate to the strengthening of diplomatic relations between Taiwan and their respective governments and citizenry.
Belize’s Prime Minister, Honourable Dean Barrow, as well as St. Lucia’s Prime Minister, Dr. the Honourable Kenny Anthony, and St. Vincent and the Grenadines’ Prime Minister, Dr. the Honourable Ralph Gonsalves participated in the brief meeting.
President Ma Ying-jeou will be leaving office two months from now on May 20th.  His visit to Belize forms part of his final overseas trip.  On March 14th, President Ma Ying-jeou visited neighbouring Guatemala, another one of Taiwan’s diplomatic allies, where he met with Jimmy Morales, the country’s president.
Taiwan elected its first female president, president-elect Tsai Ing-wen, on January 16th.  During a bilateral meeting with President Ma Ying-jeou on the afternoon of Wednesday, March 16th, Prime Minister Dr. the Honourable Timothy Harris and Minister of Agriculture, Honourable Eugene Hamilton made a commitment to attend the inauguration in May.
“We look forward to witnessing the inauguration of the first woman president,” the Prime Minister of St. Kitts and Nevis told President Ma Ying-jeou, adding that, “you must take some credit for creating an environment in which all women are encouraged.”
Details of the March 16th bilateral meeting between the Republic of China (Taiwan) and St. Kitts and Nevis will be released shortly.
In the meantime, an audio file is attached for your media house to use in full or in part.   Please note that the attached recording began one minute after the start time of the meeting.  There is complete sound from the four Caribbean prime ministers.