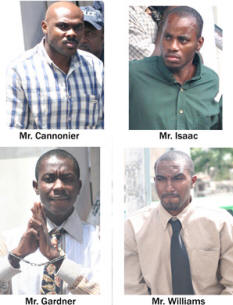 The four convicted men in giving their testimonies claimed they were innocent of Gilbert’s murder, but they were not able to convince the jury.

It was alleged that Mr. Cannonier, who is on death row for the murder of Police Constable #454 Delvin Nisbett, ordered the ‘hit’ on Mr. Gilbert from his prison confines.

The trial of the four men began on June 4 at the Sir Lee Moore Judicial Complex and ended on June 12, when a jury took less than two hours to find the four men guilty.

Throughout the trial, Chief Prosecutor Richard Cheltenham of Barbados argued that the four men colluded to murder Mr. Gilbert in order to suppress the victim’s testimony in the murder case of Constable Nisbett.

Mr. Cannonier was charged in the murder of Constable Nisbett and the prosecution argued that Mr. Gilbert had incriminating evidence against Mr. Cannonier.

Mr. Gilbert was shot and killed in Saddlers at his home before he got the chance to take the witness stand.

However, he gave the police a statement before he was killed.

Gilbert’s statement was used by the prosecution team to convict Mr. Cannonier of Constable  Nisbett’s murder.

Mr. Cannonier has vowed to appeal the conviction.

The prosecution called more than 20 witnesses.

Defense lawyers argued that the witnesses who took the stand were not reliable and trustworthy.

The four men will know their fate when they are sentenced on July 14 by Justice Albert Redhead.