PORT-AU-PRINCE, Haiti (AP) — Authorities in Haiti said Monday that they are investigating the killing of a French couple that was seeking to adopt a child from the Caribbean country.

Delmas Police Commissioner Marcelin Kether told The Associated Press that the man and woman were shot Sunday night shortly after they arrived in Haiti, noting it was their first time in the country. He said they were killed while waiting outside a guest house as their driver opened a gate.

Kether said the driver told police that at least two suspects appeared on a motorcycle and shot the French citizens but didn’t take anything. The driver was being held for questioning. Police detective Calin Joseph said he believes the suspects were trying to rob the couple. He identified the victims as Remond Alexandre and Melina Ana Therese.

France’s Foreign Ministry expressed its condolences to the victims’ families and loved ones in a statement sent to AP. It said the French government was working with Haitian authorities to investigate the deaths.

AP writer Thomas Adamson in Paris contributed to this report. 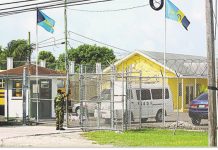