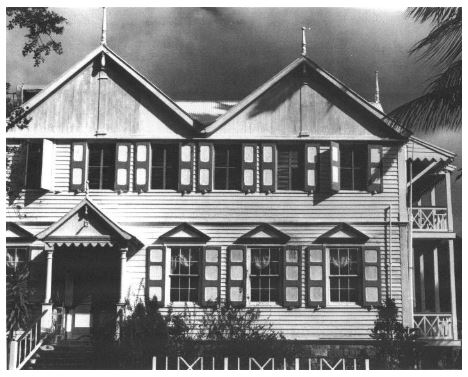 Each Caribbean island has its special character and history. St Kitts, for example, was occupied by the French for 90 years. This article looks for relics of the French who named the federation’s capital town. It finds an overlooked remain of the French, which serves as a reminder of the reliance of the European settlers on the knowledge of the indigenous Carib/Kalinago peoples.

“The town of Basseterre”. I thought it a peculiarity of my very precise mother to speak of her
birthplace as “the town of Basseterre” rather than Basseterre – until I did some reading and
examined historic maps. Of course! Her terminology was a 200+year old survival of the French settlement.
Prior to 1713, ‘Basseterre’ comprised one quarter of the land of St Christopher. 1 It was rather like a province. Its main settlement was “the town”. The Knights of Malta governed the quarter under a joint venture arrangement with the French Crown, until taken over by the King. The British finally expelled the French in 1713 under the Treaty of Utrecht.
My curiosity has led to a quest for relics of that period – when the elite of the French Caribbean colonies inhabited the Basseterre quarter – whether archives, documents, place names or buildings.
Up to 1713, a series of detailed treaties between French and English inhabitants had sought to keep the antagonistic peoples from each other’s throats – until hostilities broke out once again.
The treaties delineated boundaries, common roads, access to the salt pans on the peninsula
and decided on peace when their sovereigns were warring in Europe, among a list of other
issues. Copies of these documents can be viewed on microfilm at the National Archives of St
Kitts.
Regrettably, stone and brick walls uncovered in the historic town are deemed ‘French’ then
demolished before being either investigated or recorded. It has also been suggested that the
intricate wooden balustrades and fretwork of the town’s older buildings are testimony of the
French period. This despite fretwork being an 1800s fashion, and, the mechanical fretsaw,
called a scroll saw, used to create much of this work, being a development of the 1860s.
There is substantiation for the remains, or part thereof, of the De Poincy chateau at Fountain
dating from the 1640s. The tower house may have collapsed and landslides occurred in the
devastating 1690 earthquake; however, the foundation walls and layout so closely resemble
images of the site from the 1660s and Maltese castles of the period that – despite the
naysayers 2 – these relics corroborate the records about the Knight of Malta who imported labour to construct his residence. 3 The images indicate that bricks were produced on site and, due to the French-Carib friendship, we know that lime could be brought from Dominica.
My first new find is on the slopes of Basseterre, overlooking the town, where the stone
basement of the former estate house, Pensez Y Bien house 4 , has “round ends”. From
Caribbean archives we learned that in the 1600s – following the Carib practice 5 – English
settlers built houses with “round ends” to deflect storm winds. 6 The evidence at Pensez Y Bien is that, despite the rivalries, the French also built houses with “round ends”. Archival materials suggest that this practice died out with new technology in the early 1700s.

This relic of the French lay hidden beneath the much expanded and transformed mansion of
Shadwell – until the present owners started to rehabilitate the former Fleming estate house.
Probably damaged by earthquake in 1690, only 3 round ends remain. The stonework reveals
that the basement was repaired and later extended upwards. In the early 1700s, a masonry
ground floor was erected over the basement; in the 1800s, an elaborate wooden extension
enclosed the masonry building; later in that century further works created the familiar silhouette of the Shadwell Great House. In the 20 th century, further modernisation took place.

What a cogent reminder of our history! The elegant edifice of Shadwell Great House records
one particular aspect of our nation’s history: the interaction of the three peoples recognized as occupying the island. What other gems of our past can we locate before the dreaded bulldozers leave us a people without evidence of our history?

1 English settlers held two quarters of St Christopher. The French settled the others. The boundaries of Basseterre ran from the mouth of the Frontier River, northwards over Olivees Mountain and along the Cayon River from its source to the sea. The salt pans on the peninsula were common property. (Dyde 2005)
2 (Dyde 2005) Page 47.
3 Recent research revealed that several affluent settlers erected tower houses in the Leeward islands during the 1600s. This directly followed the European practice of erecting tower houses in insecure border lands. For example, in Ireland, Scotland and even on the African coast. (Hobson 2007)
4 (Matthew and Esq 1726)
5 (George Gillard 1707/8)
6 The term ‘round ends’ is found in documents dating from the 1600s and early 1700s. Instead of the end walls of buildings being at right angles to the other walls, they were semi-circular or a close approximation. Some houses had one, others had two round ends. This is evident in images of the period, survey and military documents.