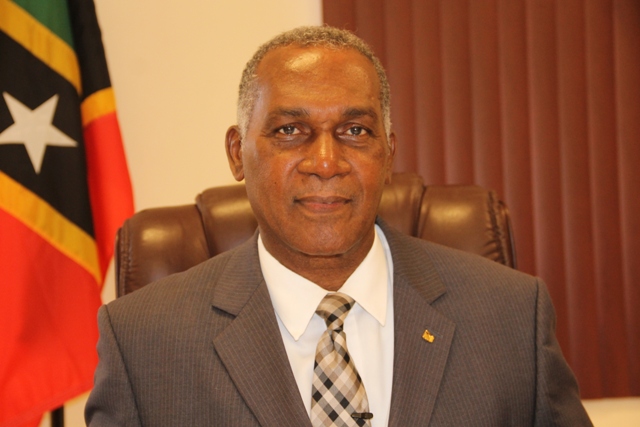 Photo: The premier of Nevis, the Hon. Vance Amory, at his office at Pinney’s Estate Sept. 7.

CHARLESTOWN, Nevis – The following is an address by the premier of Nevis, the Hon. Vance Amory, on the aftermath of Hurricane Irma dated Sept. 7, 2017:

My fellow Nevisians and residents,

It is necessary for me to thank all of our citizens at home and abroad who prayed for the protection and providence of Almighty God against Hurricane Irma.

Yesterday, after the storm had subsided, the manager of the Nevis Disaster Management Department (NDMD), Brian Dyer, was able to report that except for some minimal damage, Hurricane Irma had left Nevis relatively unscathed.

He specifically outlined the following: the water flooding of the airport; some fallen picket fences; some fallen trees; some broken electricity lines; and erosion to some of the coast on the southern western and northern areas of Nevis.

With reference to the different sectors of the Nevis economy, the minister of agriculture, the Hon. Alexis Jeffers, has reported no serious loss of crops or livestock. He has reported, as well, that the new housing constructed in the Maddens area suffered no damage because they were able to withstand the winds.

The minister responsible for public works and infrastructure, the Hon. Troy Liburd, has likewise reported that except for roads [that] were under construction at Hermitage, Shaws Road and Braziers (which suffered some erosion due to heavy runoff of surface water), the infrastructure of Nevis generally and the already constructed roads and government buildings remain in good shape. He reported as well that with reference to the water services, he was satisfied that there was 95 percent water service to all of the population of Nevis.

The Hon. Mark Brantley, the minister with responsibility for tourism, youth and sport and health, reported that all the hotels were in good shape except the Nisbet Plantation Beach Club, which suffered some damage to its beach bar. With reference specifically to the Four Seasons Resort, which had undertaken some rehabilitation of its beaches, he advised that the general manager reported that the revetment, that is the replenishment of the beaches, had held up and that they were satisfied with the state of affairs and that they will be open for business on Monday.

Minister Brantley also advised that the Mondo Track suffered no damage and, therefore, we can feel happy that the work will be completed as scheduled.

In my discussion with minister with responsibility for community affairs, Minister Hon. Hazel Brandy-Williams, she advised that all of the community centres used as shelters were in good order and that while all of the shelters were used and operated effectively, 127 [people] made use of those facilities. Those [people] had all returned to their homes.

We have also no reports of damage or loss of physical property by private citizens or by business owners, and this is remarkable and must be attributed to the high level of preparation and protective measures taken by individuals to ensure the maximum response to the instructions given by the director of disaster management and the members of his team over the course of the week leading up to the passage of Hurricane Irma.

Fellow citizens, we must compliment the director of the Nevis Disaster Management Department, Brian Dyer, and his staff for the ongoing effort to ensure that all relevant information was disseminated and made available by way of social media, the department’s website and by way of Voice of Nevis (VON Radio) and our own Nevis News Cast (NNC).

We must also commend the volunteers and the sector heads – the permanent secretaries in the Ministry of the Premier, Health, Education, Communications and Works Public Works, the director of the Nevis Water Department, customs officials, police and fire services and the social partners, including the St. Kitts Nevis Red Cross Society and all private partners for making the effort to create a state of preparedness [that] was unprecedented as we awaited the passage of Hurricane Irma.

Today, we have continued the rehabilitation and clear[ing] up of the debris [that] remain in the aftermath of Hurricane Irma and we are counting our blessings.

I am assured that the management and staff of the Nevis Electricity Company Limited (NEVLEC) have completed more than 95 percent of the repairs and that every customer should be reconnected by end of today. Any delay would be due to taking all safety measures to ensure that there are no incidents caused by the untimely return to full connectivity with NEVLEC.

The management and staff of the Nevis Island Administration continue to thank the citizens of this country and to insist and to ask them to be patient and understanding at this time.

While the generating capacity at NEVLEC has been boosted by the coming online of the new Wӓrtsilӓ 3.85 megawatt engine and the level of reliability has been restored and should be maintained barring any unforeseen occurrences while the company has reconnected all [people], this service should be uninterrupted for the foreseeable future.

Fellow citizens, residents, while we here in St. Kitts and Nevis have escaped the serious ravages of Super Hurricane Irma, let us spare a though for our brothers and sisters in the other countries of the region which have been devastated by this monster storm.  We have been advised that Anguilla, Barbuda, St. Maarten (both French and Dutch), the British Virgin Islands and St. Thomas have been totally devastated and there have been reports of deaths in Barbuda and the British Virgin Islands.

My fellow citizens, I can only ask of you as well that we thank God for sparing our country. We also pray for those in the affected countries that they will find relief.

We here in St. Kitts and Nevis, will make every effort to provide whatever assistance we can as a government.  I am instructing the permanent secretary premier’s ministry to coordinate with the director of the Nevis Disaster Management Department a relief effort consisting of monetary contribution and other necessitiesas soon as the governments of the affected countries can advise of their specific needs and requirements. This will be done in collaboration with the Nevis division of the St. Kitts and Nevis Red Cross Society and in conjunction with the effort of the National Emergency Management Agency (NEMA) in St. Kitts. I have spoken already to the prime minister in this regard.

I also implore our people to begin to give due consideration to the passage of the new storm [that] is approaching, Hurricane Jose.  The office of the NDMD will give all information as it is received to keep our people up to date with the movement of the new developing storm.

In closing, let us commend all of those who continue to do good service to help us prepare against hurricanes and other natural disasters. However, we must individually take responsibility for our initial safety and be willing to follow instructions as and when given by the experts. May God continue to be with us, as we go through the remaining months of the hurricane season and the uncertain and challenging future, let us know that we have a responsibility for our own safety. The government will do what it can, but we must also take the necessary steps to protect our property and our lives.

Thank you and may God bless you.