Photo 2: The drill rig to be used in the first phase of the geothermal development project on Nevis is pictured on its way to the N3 site in Hamilton Estate Nov. 2.

Photo 3: One of the containers with drilling equipment for the first phase in the geothermal development project heads to the N3 site in Hamilton Estate Nov. 2.

Charlestown, Nevis — Equipment for the first phase of the geothermal development project on Nevis began arriving on the island following shipping delays due to the recent passage of hurricanes Irma and Maria, pushing the start-up dates from October to mid-November.

Mc Levon “Makie” Tross, local representative for the geothermal developers Nevis Renewable Energy International (NREI), told the Department of Information Nov. 2 that most of the containers, including the drill rig, have already arrived on the island.

“The rig is coming from Salt Lake City in Utah in the United States of America,” he said. “It took about 10 to 12 days. It went through St. Thomas. It should have been here a few days ago, but with the Federal Emergency Management Agency (FEMA) we experienced some delays. They are giving priority to the disaster relief containers, so we had to wait a couple of days, but the drill rig is here. A lot of the peripheral [equipment] is here. We have up to 15 containers on site. We are waiting for another five,” he said.

Tross noted that installation and assembly are expected to commence in a day or two. The drilling process will follow and the exploratory drilling is estimated to take about 45 days.

DOSECC Exploration Services LLC, drilling contractors based in Salt Lake City, Utah, have been contracted by NREI to undertake the drilling process. The test well is projected to be 4,000 meters deep. It will be used to collect all data possible to satisfy the financiers.

Tross, noted that on completion of the exploration, the data will be analysed and final adjustments will be made to the engineering. The production process is planned in early 2018.

In response to whether there are any anticipated challenges with drilling in the first phase of the project, David Griggs, operations manager with DOSECC who is already on Nevis, explained that there could be. “Anything that potentially delay the drilling would be the idea that you are drilling in an area that is volcanic and so, things are very jumbled up geologically,” he said. “In a lot of mineral systems, you would kind of know where you are at in the stratigraphy, [but] in these particular instances, you don’t really have a good lay of the geology right now. So there could be some technical challenges that arise.”

In the initial stage of the project, four locals will assist six drillers from the US-based company. However, in the second phase, the local workforce is expected to jump to 80. 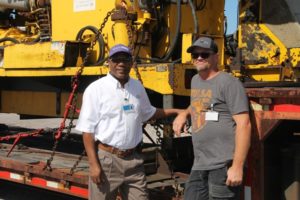 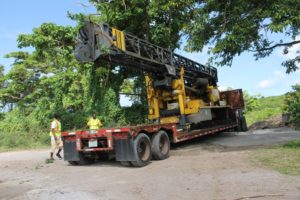 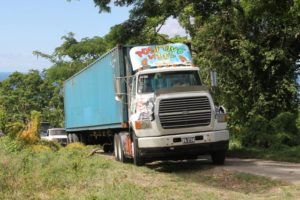