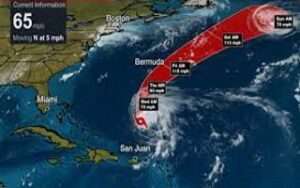 A visitor from San Diego, California rescued three terrified young girls from a dangerous riptide while they were swimming off Bermuda’s south shore as Hurricane Earl continued to race towards Bermuda on Thursday.

At noon local time, Hurricane Earl, packing maximum sustained winds of 105 miles per hour, was about 230 miles south of the island and traveling north-northeast at 13mph.

Forecasters say its closest point of approach to the island is due to be 95 miles to the southeast around midnight.

The weather began deteriorating around lunchtime on Thursday, but public transportation was expected to continue running throughout the day. Government offices remained open. Schools are closed, and it remained unclear if COVID testing for children would still go ahead on Friday.

Some cruise ships have altered their schedules, with the Norwegian Getaway canceling its scheduled visit to the island on Thursday.

National Security Minister Michael Weeks reiterated a call for anyone venturing into the waters off the south shore to “please exercise caution and also a bit of common sense” as the coastline was seeing “significant swells and rip currents”.

His call came as news of the dramatic rescue off south shore came to light.

Visitor Patrick Fishel told the Royal Gazette newspaper he dived into the water after he saw a woman desperately calling for help on Marley Beach in Warwick parish.

“I could just see the terror when I got close enough to see their faces,” he said. “The oldest sister asked me if I could get her sister’s hand. She was off to the right.

“When I looked at her I could just see her head above the water, bobbing up and down. I said, ‘Everybody, hold hands. We cannot let each other go.’

“I was just happy to be there for them and that we had pulled it off.”

Meanwhile, Danielle, the first hurricane of the Atlantic basin season which runs until November 30, has weakened to a post-tropical cyclone well to Bermuda’s northeast.

But forecasters are also keeping an eye on an area of low pressure around 1,000 miles west-northwest of the Cabo Verde Islands as well as a tropical wave that has moved off the coast of Africa.

Bermuda’s first brush with a named storm this season came when Tropical Storm Alex passed nearby in early June, knocking out power to hundreds of customers.