Basseterre, St. Kitts – Prime Minister the Honourable Dr. Timothy Harris said today during his 2018 budget address that his Team Unity government is seeking the support of the business community and the Chamber of Industry and Commerce in a number of crucial areas that include improving the ease of doing business, as well as productivity, in order to achieve sustained increases in St. Kitts and Nevis’ living standards.

“The Ministry of International Trade, Industry and Commerce will, of course, devote more effort to improve the overall ease of doing business in St. Kitts and Nevis,” Harris said, adding, “We would hope that the Chamber of Industry and Commerce will work with us on an action plan. We are mindful that there is still the need to boost productivity in both the public and private sectors, and in 2018 this will be an area of deep focus for our Human Resource Management Department in collaboration with selected line ministries. I would like to take this opportunity to encourage our partners in the private sector to really take on the challenge of integrating productivity-boosting initiatives as part of their companies’ strategic plans.”

Harris, who is also the minister with responsibility for the human resources of the government, continued: “With the private sector playing the leading role as the engine of growth in our country, increasing productivity would be critical to our success in generating higher incomes and raising the standards of living here in the federation.”

On the matter of ensuring sustainable performance, Prime Minister Harris inspired a lot of discussion in December 2015 when he announced in his 2016 Budget Address that the Team Unity administration intended to improve efficiency in the public sector by implementing the increasingly popular pay for performance practice. “The intent is to motivate individuals to perform at their optimal levels with the expectation that commensurate rewards will result from their work effort,” he said then. “At the outset, a pilot program will be considered that carves out a modest allocation of funds from existing programs to finance an incentive-based program that rewards outstanding work effort.”

The government of St. Kitts and Nevis is now moving ahead to pilot “pay for performance,” and in advance of this, its HR department has been laying the groundwork.

In the executive summary outlining the plans and priorities of the Office of the Prime Minister for the year 2018 – which is contained in Volume II of the “St. Christopher and Nevis Draft Estimates for the Year 2018: Ministry Expenditure Plans” – Cabinet Secretary Josephine Huggins states that, “The Human Resource Management Department (HRMD) in 2017 continued to play its vital role in bolstering the human capacity throughout the public service.”

Further, the summary addes “As it fulfills its mandate of recruitment, training initiatives, development and empowering, thirty (30) new entrants were employed as public servants.  Over four hundred (400) employees benefitted from formal courses including Proposal Writing, Conflict Management, Effective Communication and Professionalism and Work Ethics.  In addition, the HRMD made in-house presentations to several ministries, particularly to provide general information on the Rules and Regulations, Standing Orders governing the Public Service, and to assist in promoting knowledge and overcoming challenges.”

It continues: “As the HRMD looks ahead, 2018 promises to be a signal year…” 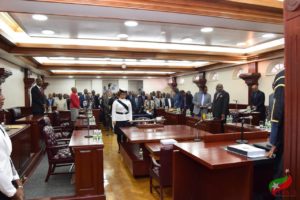