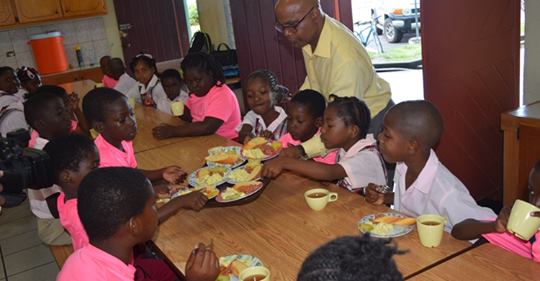 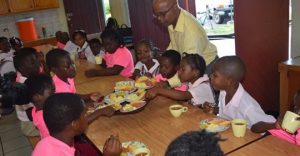 Lindsay Grant, Parliamentary Representative for Constituency #4, visited Tyrell Williams Primary School yesterday. He has been helping to ensure that the students where receive a well-balanced breakfast over the last two years.
“Breakfast is one of the most important meals of the day,” he said at the school yesterday. “There are students that are studying at a very young age and they need their food to be able to concentrate well during the course of the day.”
Grant that the programme started when some teachers told him that some students were coming to school without eating breakfast and those students were having a hard time during the day. “So we designed a programme and it is running very well,” he said. “In fact, we started with about 20 to 25 children and now we are running it with about 75 of them per day.”
When the programme started, Grant said he and his wife would start at 5 a.m. to prepare the breakfast. “That was when it was 25, but now it’s 75 or so it’s becoming a real task to get up at 5:00 a.m. to produce that.”
Two stoves and a refrigerator have been purchased. “So, we are going to start producing the breakfast on the site here at the kitchen at the Tyrell Williams for the just about 100 students in the next two weeks,” he said.
Grant said that this is a yeoman’s service and thanked the principal and staff of the Tyrell Williams Primary School for allowing the programme to thrive.
Grant said the programme runs every morning from Monday to Friday. He added that it has been designed to satisfy around 75 students per day. The breakfast usually begins with bush tea, and the meals consists of sausages, eggs, sardines and bread.
Grant said Verchild’s High School has reached out to him to have the programme replicated there for about 25 of its students.
- Advertisement -