“Our lands are being sold to foreigners during the dead of night while our citizens cannot get a square foot of land to buy,” said Lindsey Grant, leader of the People’s Action Movement.

That statement was made at a rally to celebrate African Liberation Day last Saturday at Independence Square.

The Nyabinghi Theocracy Order organized the event to celebrate African solidarity and liberation.

The event included performances by local artist in reggae, gospel, drums and even hip hop.

The theme for the event was: “Fearless is our quest for total Liberation.”

Nyabinghi also invited Grant to give the feature address at the rally.

“Today, St. Kitts and Nevis is an independent nation,” Grant said. “The slave trade is no more.  Slavery has been abolished.  But are we experiencing a new type of slavery?  Are we becoming chattel slaves in our own land once again?

“Under chattel slavery, the slaves did not have freedom to live as they choose but had to live according to the instructions of their masters.  When we do not own our land, we become mere slaves again because we do not have the power to use it how we see fit.”

Grant said there is a “scramble” for the sugar lands of St. Kitts by foreign investors.

According to Grant, the Government is selling out the land to get quick money due to the “disorderly” closure of the sugar industry and the “huge” national debt.

“In the process, our people are once again being robbed of their patrimony by an uncaring administration,” Grant said.

Grant pointed out that PAM had a plan for the former sugar workers.

My Party, the People’s Action Movement, laid out a brilliant plan for the former sugar workers.

“Part of that plan was to give each sugar worker at least 3 to 5 acres of land,” Grant said. “We did this because we recognized that the time was right for descendants of former African slaves to own a piece of the land that their family worked for generations.”

According to Grant the present government has betrayed a sacred trust.

“A Chinaman was given 1000 acres to plant stevia while the Rasta cannot get one acre to plant yam and dasheen,” Grant said. “An American was given 15 acres of prime airport land to build an empty building while Dupont was refuse one acre to build a small hotel.

“Foreign investors are given whole estates while locals cannot get a small piece of the rock to buy.

“A new type of slavery is rearing its ugly head.”

Grant challenged the people to have their voices heard. Grant pointed out that he was not against foreign investments, but there must be a leveled playing field.

“If Jonathan Chin can get 1000 acres of land then Ras Dabo Penny should get 1000 acres also.  We must ensure that our land is there for future generations of Kittitians and Nevisians,” Grant said. 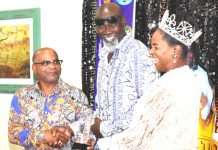