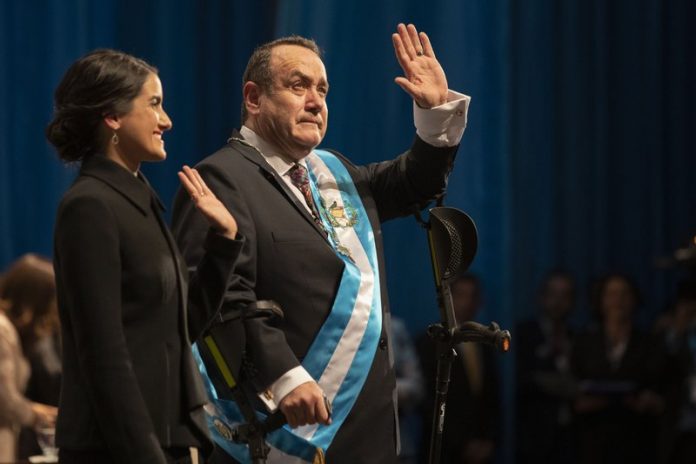 Alejandro Giammattei waves to the crowd accompanied by his daughter Ana Marcela after he was sworn-in as president of Guatemala at the National Theater in Guatemala City, Tuesday, Jan. 14, 2020. Guatemala swears in Giammattei, a conservative physician opposed to gay marriage and abortion, as its new president Tuesday while the country’s outgoing leader exits amid swirling corruption accusations. (AP Photo/Moises Castillo)

Two days after his inauguration, President Alejandro Giammattei said he had ordered Guatemala’s foreign secretary to recall the last person remaining in the country’s embassy in Venezuela’s capital and close the building.

Giammattei’s announcement came after a meeting with the head of the Organization of American States, Luis Almagro.

“It is an issue that concerns the entire continent,” the new president said.

His inauguration was attended by María Romero, a representative of Juan Guiadó, the Venezuelan opposition leader recognized as that country’s rightful leader by the United States and more than 50 other nations inauguration.

In October, the government of Venezuelan President Nicolas Maduro did not allow Giammattei, then president-elect, to enter the country. He was sent back to Guatemala on another flight.

Jorge Arreaza, Maduro’s foreign minister, accused Giammattei of “throwing himself at the feet of Donald Trump” and said the Guatemalan’s presidency was destined to “become another joke in bad taste.