Authorities say that Zamora, who is the director of the newspaper El Periódico, is suspected of involvement in a money laundering case.
But his son José Carlos Zamora told CNN that he believed the arrest was an act of retaliation, and an attempt at censorship due to the newspaper’s criticism of President Alejandro Giammattei’s government.
Zamora “is one of the main critics of the government of Alejandro Giammattei, and his arrest took place five days after strong complaints against several officials and former officials for corruption in a Sunday section of the morning paper,” El Periodico said in a statement posted on Twitter. 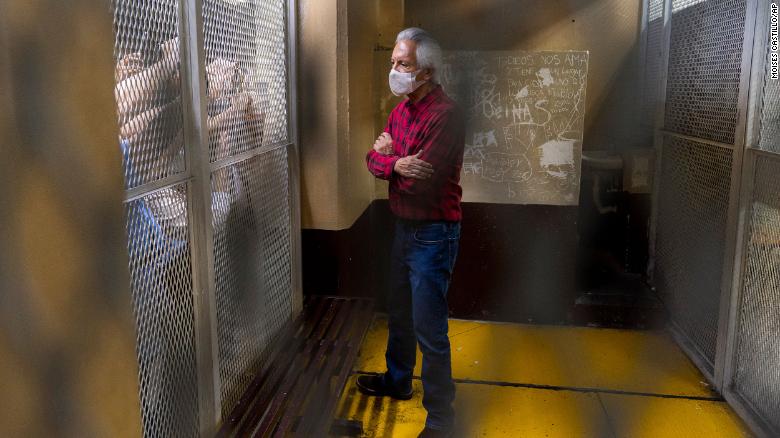 Award-winning journalist Jose Ruben Zamora stands inside a cell after a court hearing in Guatemala City on Saturday, July 30, 2022.
Zamora’s arrest “is not related to his activity as a journalist,” special prosecutor Rafael Curruchiche told radio station Emisoras Unidas.
Authorities raided the newspaper’s offices and Zamora’s home before arresting him, Curruchiche also said.
CNN has asked prosecutors for more information but has not yet received a response. CNN has also reached out to Zamora’s legal representation but has not yet received a response.
“Guatemalan authorities should immediately release and drop any criminal charges against journalist José Rubén Zamora, president of elPeriódico,” said Gypsy Guillén Kaiser, the Advocacy Director of the Committee to Protect Journalists.
The US State Department’s undersecretary for Western Hemisphere affairs, Brian Nichols, also spoke out against Zamora’s detention on Twitter, urging Guatemala toward “full respect of due process.”
Freedom of the press is enshrined in Guatemala’s constitution. However, journalists have been increasingly targeted for their reporting in recent years, according to press freedom organization Reporters without Borders (RSF).
“Journalists and media outlets who investigate or criticize acts of corruption and human rights violations frequently suffer aggression in the form of harassment campaigns and criminal prosecution,” RSF said.

The organization ranked Guatemala 124 of 180 countries worldwide on its annual Press Freedom Index in 2022.

Many journalists in Guatemala feel they are being watched, said Evelyn Blanck, a journalist and coordinator of Centro Civitas, an organization for freedom of expression.

She also pointed to a trend of attacks against the press elsewhere in the region — citing the example of Nicaragua in particular, where arrests of critics and newsroom raids have been repeatedly documented since the country’s mass protests in 2018.

“My opinion is that what has happened is that these anti-democratic actors have carefully viewed [Nicaraguan President Daniel] Ortega’s actions and have also evaluated the international reaction. And in that sense, the case of Nicaragua has been a precedent for what has now happened in El Salvador, in Guatemala.”