Excitement was in the air as the fourteen teams were supposed to have played under one roof, an aura that saw Guinness Domino Club which had started poorly when the league opened late last month edging out former champion team Lodge Domino Club 13-12.

Another close and hotly contested game saw Mansion Domino Club beat defending champion Tabernacle Domino Club in a dramatic fashion. The game was tight right from the word go and could have gone either way after the two teams tied up at 12-12.

In the decider, the pair of Cremoy Aggard and Clifford Richards of Mansion played the game of their life amassing 100 points before their opponents could score a single point, a feat that earned them a bonus point thus carrying the day with a 14-12 win.

Eighth segment of play in this only round of play in the 26th edition of Constituency Number Seven Dr the Hon Timothy Harris Domino League will play off on Thursday October 21 and all games will be at the new Lodge-Ottley’s Community Centre in Ottley’s, as was done on Tuesday, since the venue has the capacity to accommodate all the seven games under the strict Covid-19 protocols.

Order of play will see Parsons facing Molineux; Saddlers vs. Lodge; Mansion will come up against Sylvers; leader on the points standing table Unity will face Small Corner Bar; Guinness will challenge defending champion Tabernacle; Phillips vs. Christ Church; and Unstoppable vs. Ottley’s. 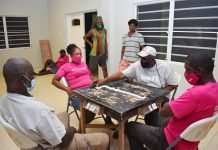 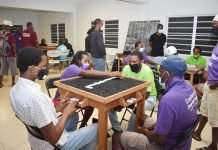