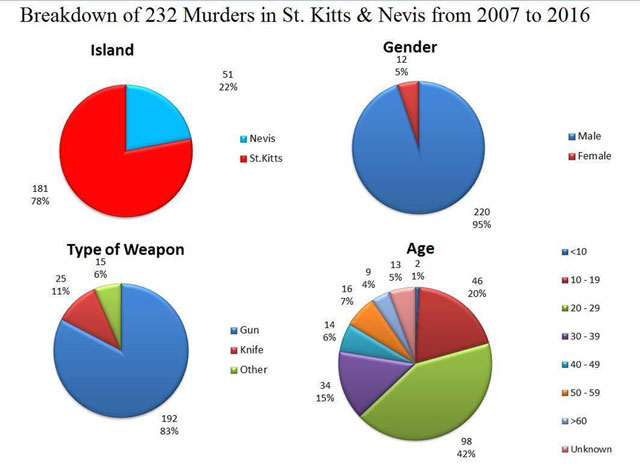 The twin island’s Federation has been plagued with an increasing number of gun-related tragedies as the fourth person in four days has lost his life.

Businessman Gary Claxton of Stoney Grove Nevis was robbed and gunned down in broad day light on Jessups Beach just hours after Clevaughn ‘Fetti” Berley was gunned down in Cardin Avenue in St. Kitts. The Federation’s death toll currently stands at 22.

With no gun factories on the island the police boast of removing 19 illegal firearms from the streets in 2016,one less than all of 2015, however, gun-related crimes have increase, rather than decreased.

Hezron Wade, who has kept statistics on homicides in the Federation between 2007 to today, noted that there have been 232 documented murders, 181 on St. Kitts and 51 on Nevis in the 46,000 twin island federation population.

A ray of hope was given to residences when Team Unity launched its 2015 manifesto, which said:

“A TEAM UNITY GOVERNMENT shall not stand by and allow any further deterioration in the safety and security of our beloved homeland. Team Unity will work immediately to bring crime down through intervention and prevention. We will reduce crime through empowering law enforcement and at the same time, work to prevent criminal activity by addressing the socio-economic causes that are the root of the problem.”

The manifesto recognised the impact crime has had on residents noting, “We cannot have a prosperous Nation without it being a safe Nation.”

“The citizens and residents of St. Kitts and Nevis are being held hostage by the criminal elements within our society. Criminals have violated the sanctity of our homes and businesses, and safety and security are being eroded. ”

Prime Minister and Minister of National Security Hon. Timothy Harris, was quoted saying the plan “represents an action to reduce homicides in the Federation.”