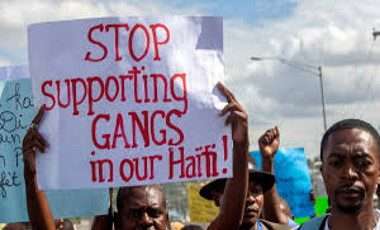 PORT-AU-PRINCE, Haiti — Two Haitian reporters were fatally shot and their bodies set on fire while reporting in a slum controlled by gangs in the capital, the second such killing this year, according to a journalists’ association.

The two men were among seven journalists who came under attack Sunday in the Cite Soleil district of Port-au-Prince while investigating worsening violence in the area, including the recent killing of a 17-year-old girl, according to a statement from Haiti’s Association of Independent Journalists.

The victims were identified as Tayson Latigue and Frantzsen Charles.

Dieudonne St-Cyr, a reporter with the association, told radio station Métropole Haiti that the journalists were ambushed by two warring gangs that he did not identify. He said the five other reporters fled unharmed, adding that the bodies of the two victims have not been recovered.

The organization condemned what it called a “villainous and odious act” and demanded that the government improve the country’s worsening insecurity amid a spike in killings and kidnappings. Gangs have grown more powerful since the July 7, 2021, assassination President Jovenel Moïse.

“The journalists were just doing their job,” the group said. “They didn’t commit any crime.”

The organization said the killings are “further proof of the inability of the state to protect lives and property, which is nothing other than a violation of human rights.”

The Miami-based Inter American Press Association, which urged authorities to find those responsible, said this has been one of the most violent years against the press since the organization began keeping records in 1987.

The group noted that Haitian journalists “carry out their work in conditions of extreme risk and at a disadvantage in terms of resources and protection.”

Prime Minister Ariel Henry also condemned the killings, saying he was “profoundly shocked” at the deaths.

“We strongly condemn this barbaric act, while sending our heartfelt thoughts to the families of the victims and their colleagues,” he tweeted.

In January, two other journalists were killed by gang members while reporting in Laboule, a troubled area south of Port-au-Prince.

In addition, journalists are still demanding answers in the March 2018 disappearance of freelance photographer Vladjimir Legagneur, who was last seen in the Grand Ravine area, one of the poorest and most dangerous districts in Port-au-Prince.