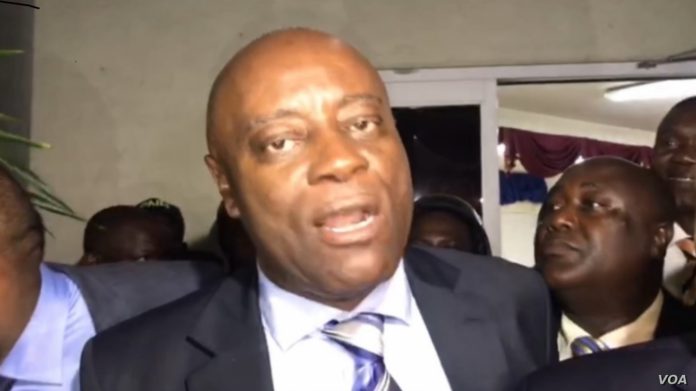 WASHINGTON/PORT-AU-PRINCE (VOA)- Haiti’s Senate canceled a vote Wednesday on Prime Minister nominee Fritz William Michel after someone poured gasoline on the chamber floor in an attempt to burn it. This came after Senator Saurel Jacinthe claimed Senate Leader Carl Murat Cantave and Michel himself had offered several lawmakers thousands of dollars to vote in favor of the nominee.

“Mr. Cantave, the president of the Senate, came to my home and offered me money,” Sorel told reporters, flanked by opposition colleagues.

“The prime minister went to (Wilfrid) Gelain’s home with 500,000 U.S. dollars in hand. He offered (Senator) Kedlaire (Augustin) $100,000 yesterday but he refused to take it. Then this morning he (Augustin) accepted.

He gave Gelain $100,000 U.S.  Dieudonne (Luma Etienne) signed a paper accepting 100,000 U.S. dollars, so my message to him – (Senate) President Cantave and Normil Rameau (the national police chief) – is that if they plan to send a S.W.A.T. (Special Weapons and Tactics) team down here – we’ll be waiting,” Sorel said.

“We’re waiting for the massacre but now the national and international press are also watching what’s getting ready to happen inside the Senate.”

All the senators named have denied accepting bribes in exchange for their votes.

“For the sake of history and the truth, I never offered money to Senator Saurel Jacinthe who is dillusional. I am a proud and arrogant man. If the senator has proof (photos or sound) show them. The nation can not take this drama. ” Senator Cantave tweeted Thursday morning.

In an earlier interview with VOA Creole, Senator Dieudonne Luma Etienne, a member of the majority party, said she thought it was each lawmaker’s constitutional duty to act on the nomination.

“I think the debate should happen, even if their are opposing opinions, but violence has no place in the process, because violence should not be used as a political tool. That’s all I’m saying,” she said. “The parliament can vote for or against or abstain but the vote is a must for us all. So therefore I’m here to fulfill my duties as a legislator.

The opposition alleged to reporters that Senate leader Cantave had asked President Jovenel Moise to authorize National Police Chief Rameau to send a S.W.A.T. team to secure the parliament. The team never showed up.

Haiti has been without a prime minister for over six months, leaving the country’s political affairs in limbo since Jean Henry Ceant was ousted in a no-confidence vote. President Moise has repeatedly pleaded with lawmakers to approve his nominee so the government can move forward on pressing matters such as security, the economy and education.

The Chamber of Deputies approved Michel’s nomination on September 3, undeterred by the opposition’s attempt to block the vote by vandalizing furniture and pouring oil inside the building on the morning of the vote.

Things looked promising early Wednesday when VOA Creole caught up with Senator Cantave in a newly constructed room where the session on the prime minister nominee was going to be held. Workers were setting up chairs and placing fans around the room.

“We hope we’ll find the serenity and calm and the tranquility needed to organize the session to ratify the nomination of the prime minister nominee Fritz William Michel,” he said.

But the atmosphere outside the parliament building was the exact opposite of that. Protesters, activists and opposition lawmakers stood by as tires were set on fire in the middle of the street and a fire bomb was thrown into a police bus, engulfing it in flames. No one was hurt and police arrested two young men shortly afterward. As they were being led away, the suspects told VOA Creole that they had just been “standing in the area” and “had done nothing wrong.” Police arrested them anyway, as journalists snapped photos and recorded video.

In the early afternoon, opposition senators led by Youri Latortue and Antonio Cheramy took journalists out into an area in front of the parliament where policemen were standing guard. They told reporters they wanted to confront an officer who had threatened to shoot Senator Cheramy earlier in the day.

“Where is he? Where is he?” Senator Latortue asked as the crowd yelled “beat him. Beat him up!” The situation degenerated, with police arguing with each other as they tried to prevent the lawmakers from confronting the officer in question.

“The police (force) is an institution that is working for (the executive and legislative branches of government) and for the people,” Senator Latortue noted, as he made his way back to the parliament, surrounded by journalists. “So that’s why we came out here immediately to let the police chief know what’s happening and to say that the citizens of the nation have a right to
attend the Senate session too. The constitution says that.”

“We think the fight we are waging is for everyone, including the police, they need to understand that,” Senator Evaliere Beauplan told reporters. “And that is our message to them, so they don’t try to overstep and use excessive force and end up victims of what is happening in the country today.” Nearby, someone shouted “they are all on the take, accepting bribes!”

Things heated up again when opposition senators and a group of activists headed inside the room where the Senate session was scheduled to happen and started breaking windows and overturning chairs. One activist ran up to the podium and pretended to be Senate leader Cantave opening the session.

“We’re here because the constitution says that all sessions that happen here must be public, so the people have a right to be here,” an activist who entered the parliament told VOA Creole. “We are activists, we are engaged citizens. We took a hit from (Chamber of Deputies President) Gary Bodeau and we refuse to be duped again.”

The man also had a message for the Senate leader. “Carl Murat Cantave and all the lawmakers who accepted 100,000 U.S. dollars from the president who sought to buy the people’s votes, we say it will never happen. We are taking it upon ourselves to rewrite history and we say enough already.”

Another activist, who said he is a lawyer, told VOA Creole he was present to pressure the lawmakers to represent the people “with honor”.

“We’re at war,” he said. “So we’re asking the nation to fill the streets if Fritz William Michel does not withdraw and we say President Jovenel Moise must resign… We will never give up the fight.”

Michel and members of his cabinet arrived at the parliament late in the evening and sat in the diplomatic salon to await the opening of the session. But after someone poured gasoline on the floor in an attempt to set the room on fire, the session was postponed.

“The session on the ratification of PM nominee @fritzwmichel’s political platform at the Senate has been postponed sine die (Latin for without assigning a day for further meeting)” Pierre Adler, assistant and communications chief for Senate President Cantave announced on Twitter.

Thus, the rollercoaster ride of a day ended. The S.W.A.T. team never materialized and everyone headed home.