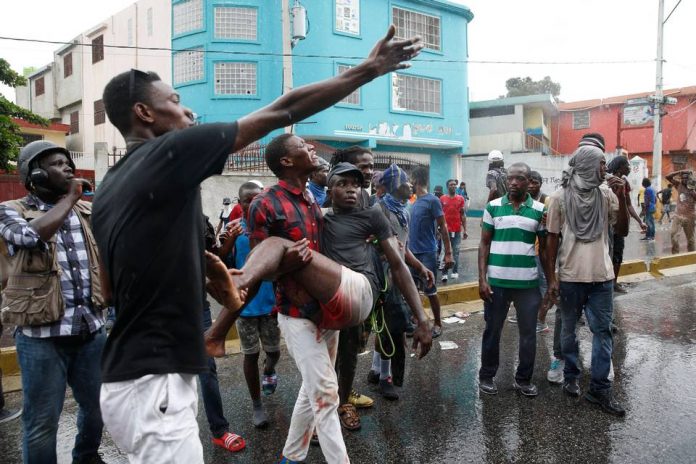 WASHINGTON/PORT-AU-PRINCE – The head of the Civilian Tribunal of Croix-des-Bouquets has ordered the release of Supreme Court Justice Yvickel Dabresil.

The justice was one of 23 people arrested early Sunday in connection with an alleged coup attempt. A video produced by the Haitian National Intelligence Service and distributed to the press begins with mobile phone footage of Dabresil shortly after his arrest.

According to local media, the judge remains in detention at the Croix-des-Bouquets Government Commissioner’s office, pending the enforcement of the release order.

Seventeen others who were arrested in a sting operation regarding the alleged coup attempt remain in detention.

On Tuesday, Dabresil was transferred out of the National Police Force Investigations Unit facility (DCPJ – Direction Centrale Police Judiciare – Haitian equivalent of the FBI) to a facility in Croix-des-Bouquets, located 13 kilometers northeast of Port-au-Prince. A VOA Creole reporter said the judge was transferred without being arraigned.

According to a human rights activist who visited Dabresil in detention, the justice refused to respond to DCPJ questions. Because Dabresil is an officer of the highest court of law in the nation, his legal authority supercedes that of the lower court judges, according to Haiti’s constitution.

“I think the arrest was completely illegal,” Madistin said in an interview with a Haitian radio station, citing the fact that legal procedures were not followed. According to Madistin, the justice of the peace who is required to be on the premises before an arrest warrant is served was absent.

But in an exclusive interview with VOA Creole on Tuesday, President Jovenel Moise defended the operation that led to the arrests.

“The chief of the tribunal of Port-au-Prince was asked by a journalist who has jurisdiction over crimes against the state. He responded if you pull off a coup d’etat, you are a hero. If you don’t, we will judge you as a criminal in a court of law with a jury,” Moise said.

Pressed on the questionable circumstances of the arrest, Moise pushed back.

“A plot against the state isn’t something that happens in a day, to invade the (national) palace, you would need a thousand people. This coup was planned. A national palace security officer was contacted by the plotters — a foreigner contacted him to plan a coup d’etat and it was so well planned that they even had an arrest warrant with the president’s name on it. We must be able to speak frankly about these things,” Moise said.

The U.S. State Department and United Nations have expressed concern about the recent developments in Haiti.

“We understand the Haitian National Police is investigating 23 individuals who were arrested over the weekend. The situation remains murky, and we await the results of the police investigation,” a State Department spokesperson told VOA.

According to reporters, police first fired tear gas to disperse a large crowd of protesters who were marching through the streets of the capital chanting, “Jovenel’s term is over. Down with dictatorship!”

After breaking up the protest, police turned on reporters, firing tear gas and spraying an unknown substance in their faces. At one point, a police unit fired tear gas into a pickup truck belonging to Radio-TV Pacific transporting at least 10 people, overwhelming it with smoke.

VOA Creole reporter Matiado Vilme said members of the media had their press badges visible to law enforcement. Some wore bulletproof vests with the words “Press” printed on the front and back. When Vilme took cover behind a nearby pole, she said, she was followed by a police officer who fired a tear gas cannister at her feet.

Shaken and furious, the group of journalists with cameras, microphones, mobile phones and various other reporting equipment held high, walked to the Bureau for the Western Department (Bureau Departmental de l’Ouest) to file a complaint against the police.

“We spoke to the DDO (Directeur du Departement de l’Ouest, Paul Menard). We explained the situation and gave him examples of journalists who had been victimized by the police,” said Florence Lisene, a VOA Creole stringer who was one of three journalists who filed the complaint.

“The only guarantee he gave us was that he was going to bring this complaint to the police chief to be examined and investigated. He also said they would investigate the police backup who committed these actions to determine what disciplinary measures are warranted,” Lisene said.

A U.S. State Department spokesperson told VOA: “The United States has seen reports of police injuring journalists as they attempted to disperse recent demonstrations. We call on Haitian authorities to respect the freedoms of expression and association and the right to peaceful assembly, and we call on the Haitian National Police Inspector General to conduct a thorough investigation of these incidents.”

“ANMH vehemently condemns the barbaric acts committed by the police, of which journalists were victims over the past days,” the organization said.

The Committee for the Protection of Journalists (CPJ) issued a statement Feb. 9 expressing concern about the police shooting Feb. 8 of two journalists as they covered a protest in the Champ de Mars neighborhood, calling for Moise’s resignation.

“Haitian authorities should thoroughly investigate the shootings of journalists Alvarez Destiné and Méus Jeanril, identify those responsible and hold them to account,” CPJ said.

One of the wounded reporters has undergone two operations for the injuries he suffered at the hands of police.

Haiti Secretary of State for Communications Eddy Jackson Alexis commented on Twitter: “I was stunned to learn that journalist @CheryHaiti was injured today during a protest in the capital. I invite @pnh_officiel to be more careful in its interventions and invite journalists to exercise caution while working.”

A United Nations report published in September 2020 said the uptick in violence against journalists covering protests was cause for concern. Among its recommendations for protecting media workers was “strengthening training for police and law enforcement on freedom of expression, and appropriate behavior in dealing with the media.”