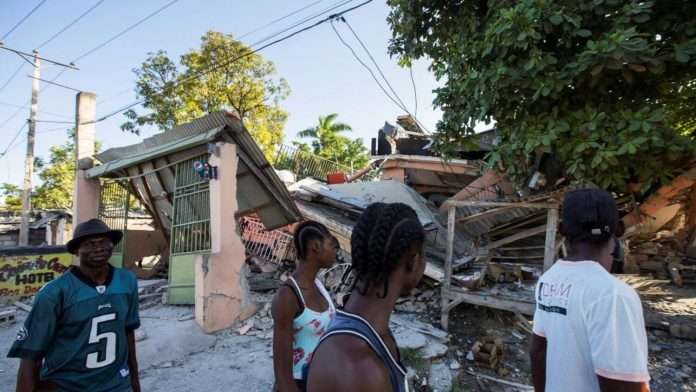 Reuters- A 5.3 magnitude earthquake struck Haiti’s southern peninsula on Monday, the US Geological Survey reported, killing one person and sending panicked residents flooding into the streets in the city of Les Cayes just six months after a major tremor in the same area

The quake’s epicentre was 3km (1.9 miles) from the Anse-à-Veau, near the city of Les Cayes, the USGS reported. It was short but strong, and was felt in the capital of Port-au-Prince, according to a Reuters witness.

Children ran out of school buildings in Les Cayes and “people were terrified,” even though there was no damage, according to one resident. Aftershocks continued to be felt around the country over an hour after the quake hit.

Jean Robert Léger, a resident of the town of Pestel on the southern peninsula, said the impact appeared to be minimal.

“In Pestel, there is not so much damage,” he said by phone. “We see that the houses next to the sea that were already damaged have collapsed some more.”

Haiti’s civil protection chief Jerry Chandler said in a text message that no damage had been reported.

“All reports from the departments mention the panic the tremors caused but no damage thus far,” he wrote.

More than 2,000 people were killed in a 7.2 magnitude earthquake in August that left tens of thousands of homes in ruins and forced many families to sleep outside.

The poorest country in the Americas, Haiti is still recovering from a 2010 quake that killed more than 200,000 people.