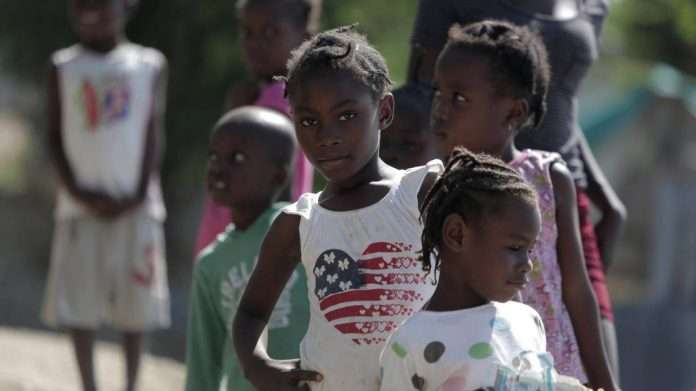 Even without a global pandemic, Haiti’s children faced a hunger crisis. Now it’s getting worse.

COVID-19, an economy already in free fall, droughts and intense tropical storms, gang violence and chronic instability are not only raising levels of hunger in Haiti but leading to increased levels of severe child malnutrition, the head of the United Nations’ leading child advocacy group in the Caribbean nation has warned.

The number of children suffering from “severe acute” childhood malnutrition has more than doubled, increasing from 41,000 last year to an estimated 86,000 children this year, said Bruno Maes, UNICEF’s representative in Haiti,

“There are now 217,000 Haitian children ages 6 to 59 months who now suffer from acute malnutrition,” Maes said, citing a U.N. survey.

Malnutrition in Haiti, he said, is related to several factors, including the drought-driven crisis in the 1990s and 2000s, and the 2010 earthquake. All of which have affected nearly 5 million people in Haiti “and caused economic damage,” he said.

UNICEF’s estimates come as the agency launches an emergency appeal for $3 million to purchase meals for the next six months, and to support Haiti’s Ministry of Health in protective measures like identifying children who need assistance and getting them help. The funding is urgently needed, UNICEF said, because in the next few weeks it will run out of life-saving, ready-to-use therapeutic food.

“It puts 86,000 children affected by severe acute malnutrition [risking] the worst complications, unless additional funding is provided,” Maes said. “Without these funds, thousands of children will no longer receive this critical and life-saving support.

“It’s a critical investment because investing at the very beginning of a child’s life is the best investment a country can make,” he added. “Well-nourished and healthy children get better grades and become productive adults who can help build Haiti’s future.”

Haiti has long suffered from high levels of food insecurity. A U.N. food analysis estimated that more than 4.4 million Haitians, or 40 percent of the population, will need food assistance this year as a result of the reduced purchasing power Haitians suffered last year amid the COVID-19 pandemic, tropical storm Laura and a sociopolitical crisis.

Haiti still remains the only country in the Western Hemisphere that has yet to administer vaccines to its population. Meanwhile COVID-19 infections and deaths are spiking. The country has lost in recent days several well-known personalities including a Catholic monsignor and the rector and vice rector of the Episcopal University. As of June 6, the most recent available data from the Ministry of Health, Haiti registered 16,079 confirmed COVID-19 infections and 346 deaths. A month earlier, on May 6, it reported 13,245 COVID-19 cases and 268 deaths coronavirus-related deaths.

Meanwhile, the latest round of violent gang clashes has forced thousands of Haitians, including children, to flee their homes in the Martissant neighborhood. Some have sought refuge in nearby Carrefour in a gymnasium, or in public plazas in other communities. Others have left the capital altogether for the rural countryside. The Martissant neighborhood, which is largely controlled by armed gangs, is located not far from the National Palace.

During a visit Tuesday to the area where some of the displaced have sought refuge, Maes lamented the situation, especially for children who had lost days of schooling and were being exposed to diseases. UNICEF and partners, he said, are providing assistance to the displaced, “but more aid is urgently needed.”

UNICEF transported via helicopter 200 hygiene kits with a number of items including soap, water chlorination tablets and tooth-brushes. It also provided 10,000 masks, 250 mattresses and tarps, and organized a mobile clinic to care for children suffering from malnutrition.

In a visit to South Florida on Thursday, Haitian Bishop Oge Beauvoir, who runs Coconut Creek-based charity Food for the Poor in Haiti, said he’s lived in Haiti 45 years out of his 65 years and “what we are experiencing today, I haven’t seen that before.” The country is “facing very tough challenges,” he added.

Speaking of those who have been displaced, he said, “in the streets of Port-au-Prince, you meet them everywhere, they are like people going nowhere with their children.”

“Many people cannot eat these days,” he said, noting that rising food prices and the devaluation of the local currency are creating added challenges. “People used to be able to feed their families. They cannot afford to do it anymore. And people who are working are coming to us to request food.”

A U.N. humanitarian-needs assessment found that as a result of the COVID-19 pandemic and other challenges, some Haiti households saw their income drop by more than 60%. Access to healthcare and water, hygiene and sanitation services have also been affected, leading to a drop in immunizations. That has led to an increase in diarrheal diseases, the main cause of malnutrition among children under age 5.

“In the context of the COVID-19 pandemic, there were drops in child immunization, ranging from 28% for some vaccine antigens, to 44% for others,” Maes said, stressing that essential healthcare for children and access to quality healthcare need to be expanded.

The immunization drops are especially worrying. A UNICEF equity analyzer shows that nearly 10% of Haiti’s children have not been vaccinated, while 58% are not fully vaccinated, meaning they did not complete all of their required vaccines.

Though the data is from 2017, Maes said UNICEF is still “very concerned.” Further disconcerting is that, of those who are not fully vaccinated or haven’t been vaccinated, one out of two live in the metropolitan Port-au-Prince area as well as in Gonaives and St. Marc, just north of the capital, where access to essential services for children is lacking.

“In some of these places, children are also mostly affected by the violence that is ongoing in some [sections] of these metropolitan areas,” he said