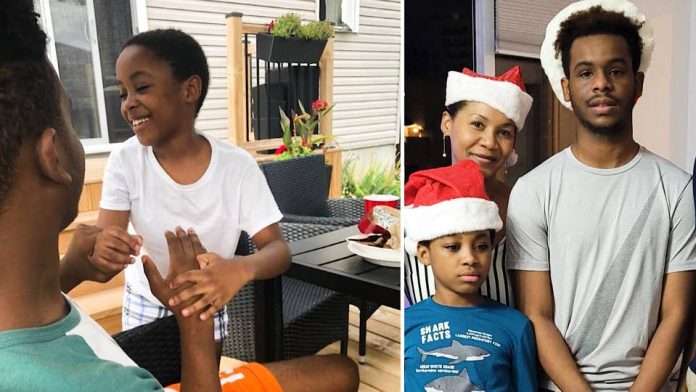 A 9-year-old Haitian boy who was separated from his older brother by US immigration authorities was reunited with his family late Tuesday after spending about nine days in government custody, his attorney said.

On Jan. 17, Vladimir Fardin and his brother Christian Laporte, 19, were detained by US Customs and Border Protection (CBP) shortly after landing at San Francisco International Airport. CBP officers took away their visas because of missing paperwork in Laporte’s case and in Fardin’s case for previously attending elementary school in the US in violation of his tourist visa.

Because Laporte was deported by CBP, Fardin was in the US without a “legally-acceptable and court-recognized guardian” and was thus classified as an unaccompanied minor and placed in the custody of the US Department of Health and Human Services (HHS) Office of Refugee Resettlement (ORR), which cares for immigrant children.

In the days that followed the separation, attorneys and advocates tried to quickly have Fardin returned to his family, but faced an obstacle when ORR initially said the boy had to remain in a foster home for a 14-day quarantine because of the pandemic. The continued pushback from ORR, advocates said, was an example of how difficult it can be to get a child released from government custody.

Attorney Marc Van Der Hout, who is representing the two brothers, said the detention was “absurd” and pushed ORR to release Fardin before 14 days. Not only was Fardin suffering psychologically because this was the first time he had ever been away from his family, the attorney said, but keeping him in custody for two weeks only made sense if he intended on staying in the US to fight his case and would eventually be sent to a location with more children.

“This is a 9-year-old kid who has never been alone a day in his life who is suffering tremendously,” Van Der Hout told BuzzFeed News. “We just want to get him home to his mother, he’s going through a lot in custody.”

Van Der Hout said he and attorney Johnny Sinodis worked with ICE and ORR through the weekend to win Fardin’s release.

“What ultimately happened is we had to go up the chain to ORR’s DC office because the local office was insisting on not releasing [Fardin] for 14 days,” Van Der Hout said. “We kept telling them that policy only applies if he was going to be sent to general population in ORR and not if he’s planning on leaving.”

In a statement, ORR said it does not comment on specific cases or identify unaccompanied immigrant children.

“As you know, by law HHS is required to provide care for UAC who are referred by another federal agency,” said an ORR spokesperson. “Once in our care we work to put them in immediate contact with parents or family members so they may be united with a suitable sponsor as soon as possible.”

Van Der Hout said the two brothers shouldn’t have been separated in the first place because CBP could’ve released them under a process called “deferred inspection” and allowed Laporte to get his paperwork together.

Last Friday, ICE dropped removal proceedings against Fardin so he no longer has an active immigration case to fight in the US.

Amy Cohen — a child psychologist and executive director with the non-profit Every Last One, which works with immigrant children — spoke with Fardin via video while he was in ORR custody.

“He was tearful through the entire 70 minutes we spoke,” Cohen told BuzzFeed News. “He broke down and at some point sobbed so much he wasn’t able to talk.”

Cohen said Fardin was already suffering from separation anxiety and this experience will likely deepen that trauma.

“He’s [had] continued anxiety and distress,” Cohen said. “Not only was this unnecessary, but it endangers him psychologically and physiologically.”

Traumatic stress can negatively impact a child’s brain development, as well as their immune and cardiological systems, Cohen said.

But not every child is released as quickly as Fardin, she noted.

“This is a child who has two excellent private attorneys and the director of a national non-profit advocating on his behalf,” Cohen said. “Now think of all the children in the custody of ORR who don’t have that kind of advocacy and are not able to get out of these institutions.”