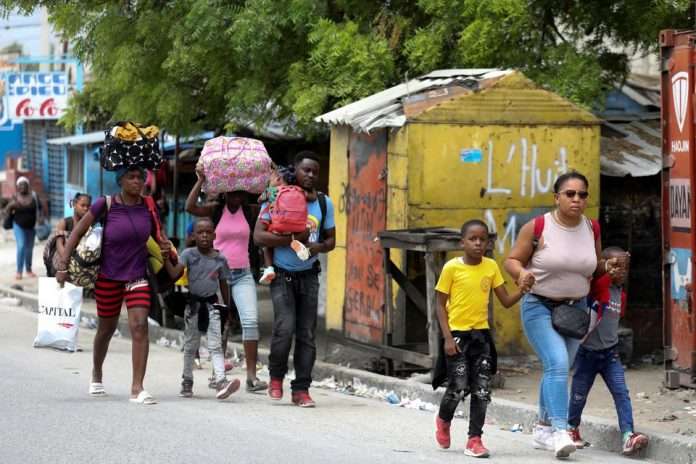 - Advertisement -
Residents carry their belongings as they flee their homes due to ongoing gun battles between rival gangs, in Port-au-Prince, Haiti May 2, 2022. REUTERS/Ralph Tedy Erol

PORT-AU-PRINCE, May 2 (Reuters) – Haitians in the capital Port-au-Prince fled their homes on Monday as gun battles broke out between rival gangs, according to a Reuters witness, following clashes between armed groups that killed at least 20 last week.

The country’s civil protection authority said on Wednesday that battles between the rival Chen Mechan and 400 Mawozo gangs, the latter of which kidnapped a group of American and Canadian missionaries in October, forced thousands to flee their homes.

Gunfire rang out on Monday afternoon in the poor neighborhood of Cite Soleil, where dozens of panicked residents left homes and were running in all directions, according to the Reuters witness.

Some walked with their hands in the air to show they were not armed, in order to avoid being attacked.

It was not immediately evident which gangs were involved or how many people had been displaced.

Armed men in civilian clothes were also present in the neighborhood known as “La Plaine,” near Haiti’s Ministry of Agriculture.

The Haitian National Police did not immediately respond to phone calls seeking comment.

Gang violence in Haiti has worsened since the assassination last July of President Jovenel Moise, with large parts of the country’s territory now out of the reach of state authorities.

That has also fueled migration toward U.S. shores, with rising numbers of Haitians now traveling by sea through the Bahamas in overcrowded and unseaworthy vessels. read more