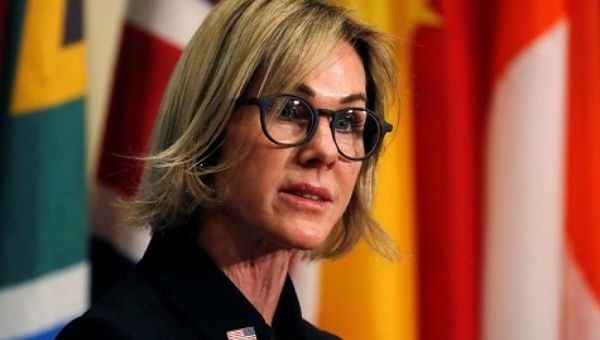 Social and political organizations in Haiti rejected the visit of the United States ambassador to the United Nations, Kelly Craft, who arrived in the country on Wednesday.

Videos on social media showed protesters expressing anger over what they call the U.S.’s interference in Haitian politics, signaling Craft’s visit as its latest instance.

Social organizations have been calling out the U.S. for backing up the widely unpopular President Jovenel Moise and demanding an immediate end to the meddlings in the nation’s internal affairs.

A spokesman for the Consensual Alternative for the Refoundation of Haiti, Andre Michel, categorically rejected Craft’s visit and her country’s repeated calls for dialogue.

‘We will not negotiate with corrupt people, with those who perpetrated the La Saline massacre. Resignation and nothing else,” Michel said in a reference to the president.

Craft is visiting Haiti “to highlight the support of the U.S. for a more peaceful, secure, prosperous and democratic future for the Haitian people,” U.S. diplomatic mission in Port-au-Prince said.

The representative of Washington met with  Moise and some of the island’s political and economic leaders, with the alleged purpose of encouraging the adoption of urgent measures and form a government “in the service of the people”.

“A fully functioning government must fight corruption; investigate and prosecute human rights abusers, including those responsible for the La Saline and Bel Air killings; and combat narcotics and human trafficking,” the representative said following the meeting, apparently ignoring that the president himself is accused by his own people of these abuses.

“President Moise and other democratically elected leaders have an obligation to come together, put aside differences, and find an inclusive solution for the benefit of the people of Haiti,” she added.

On the other hand, dozens of people were brutalized by security forces as they were protesting Craft’s visit near the Toussaint Louverture International Airport.

Police officers, who have been accused by some to be funded and trained by the U.S. and to take their orders directly from the U.S. embassy, fired shots in the air forcing protesters to the ground before beating and kicking them, demonstrators said.

As the crisis faced by Haiti is deepening, this visit is the fourth time a U.S. official goes to the island so far this year.

In June, the Bureau of Western Hemisphere Affairs deputy assistant secretary Julie Chung met with Moise, as well as a mission led by Carlos Trujillo, former U.S. ambassador to the Organization of American States (OAS).

The U.S. has been constantly supporting the Haitian president who is accused of financial crimes, including fraud, money laundering, and embezzlement of hundreds of million of dollars meant for the country’s development.