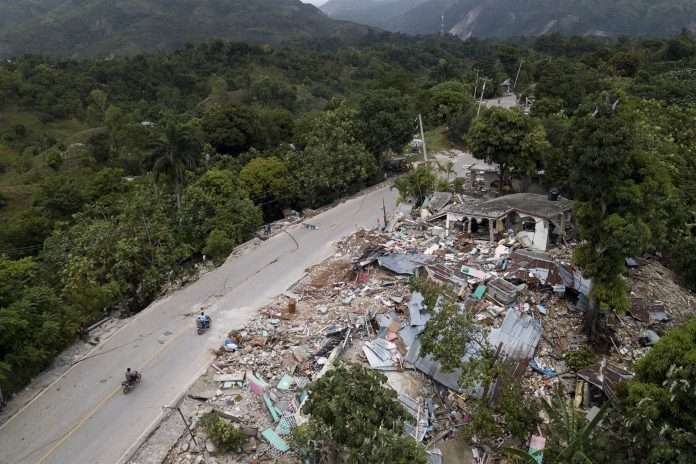 The 2010 earthquake response was riddled with failure. Haitians cannot afford another catastrophe

The latest statistics from Haiti’s August 14 earthquake are stark: at least 2,207 people have been confirmed dead and more than 12,000 injured. More than 130,000 homes have been damaged or destroyed. Aftershocks continue, and new landslides in the wake of the follow-on Tropical Storm Grace mean those numbers are expected to rise in the coming weeks.

But the most dispiriting number is 11. That is the number of years that passed between Haiti’s last major earthquake and this one – years in which corruption has hollowed out the state, armed gangs have expanded their territorial control, and political turmoil has intensified, culminating in the assassination of the president, Jovenel Moïse, in July.

The 2010 earthquake, while marginally weaker than this year’s, became the deadliest seismic event recorded in the western hemisphere, with more than 200,000 people killed. That was thanks to two factors: its proximity to Haiti’s densely populated capital, Port-au-Prince, and the Caribbean country’s lack of preparation in terms of building safety, infrastructure and emergency planning. Fixing those underlying weaknesses was what Bill Clinton, the former US president who oversaw the 2010 post-quake recovery, was talking about when he promised Haiti would “build back better”.

The latest disaster has shown the failure to achieve those promises. Not only were the buildings that fell in the quake-hit cities of Les Cayes, Jérémie and the villages and towns of Haiti’s southern Tiburon peninsula every bit as fragile as those that crumbled in Port-au-Prince, Léogâne and Jacmel more than a decade ago, but Haiti’s government has become far weaker and more riven by corruption than the one that flailed in the face of that tremor.

Well-armed gangs now control crucial transportation routes, including an essential corridor on the only road leading from the capital to the new quake zone. Nearly everyone affected by the disaster is poorer and hungrier than they were 11 years back. These vulnerabilities are not despite those earlier efforts to “help”, but a direct result of them.

The response to the 2010 earthquake was marked by talk of big money and big action, with little to show for it in ordinary Haitians’ lives.

The typical quake survivor received a tarp for shelter, immediate medical attention for a deep wound or broken bone, and perhaps a hygiene kit and a few days’ worth of food and water. Only a pittance of the billions spent was put into the hands of Haiti’s poor majority; perhaps the most enduring legacy of the intervention was a devastating cholera epidemic caused by United Nations peacekeepers nine months after the quake.

Donors’ primary excuse for their unwillingness to put money in Haitians’ hands – as opposed to those of their own countries’ militaries, contractors or aid groups – was corruption. Though none offered evidence of significant corruption in the government of the then president, René Préval, the image of the black republic as a place home to endemic corruption persisted in many foreigners’ minds. Many, including those in the Obama administration, blamed Préval – often an obstinate man with an abiding skepticism of foreign interventions – for the slow pace of recovery and reconstruction.

Then, in late 2010, a presidential election was held. When the initial results showed the candidate of Préval’s Unity Party headed to a second-round runoff, the US embassy immediately cast doubt on the results.

In January 2011, Hillary Clinton, in her role as Obama’s secretary of state, flew to Port-au-Prince to demand Préval’s candidate be taken out of the race, and replaced by the third-place finisher, a rightwing populist pop singer named Michel “Sweet Micky” Martelly. Martelly appealed to the most powerful international actors in Haiti, including Bill Clinton, because of his enthusiastic support for foreign investment schemes – including a push to reinvigorate Haiti’s garment assembly sector, in which Haitian people would be used as cheap labour to make clothes.

The Martelly years ended up being some of the most corrupt in Haiti in a generation. A Haitian anti-corruption watchdog reported in 2017 that much of the $2bn in Venezuela’s PetroCaribe oil loans – money freed up to be spent on infrastructure, public health, and other needs – had been embezzled during Martelly’s presidency.

By then Martelly had left office, handing power to his handpicked successor, a largely unknown businessman from Haiti’s rural north called Jovenel Moïse. (Auditors later found that Moïse had been the recipient of millions of dollars of the PetroCaribe money under Martelly, including having been paid two separate times for a road rehabilitation project that was never completed.)

A massive wave of nationwide anti-corruption protests broke out against the Moïse government, only to be crushed violently by police and allied gangs. A wave of kidnappings, massacres and political violence gripped the country from 2019 through 2021. Not a single election was held at any level, allowing parliament to disband and Moïse to appoint mayors himself and otherwise rule by decree. As the end of Moïse’s constitutional term neared in early 2021 he announced his intention to stay on for another year, while planning a constitutional referendum that would allow him to succeed himself. Through it all, Moïse enjoyed the robust support of the Trump administration.

President Moïse’s killing leaves Haiti less stable but as elitist as ever.
On 7 July, Moïse was assassinated in his home above Port-au-Prince. Dozens of Colombian mercenaries were arrested within hours of the attack. The head of Moïse’s presidential security detail was also brought in for questioning. Many questions remain, from who conducted the assassination to which political figures, if any, sanctioned it.

Those were the conditions in place when the 14 August earthquake struck, and they are the conditions in place as the response gets slowly under way. Responders find themselves dealing with chronic problems, such as food insecurity and longstanding health needs, as much or more than the immediate effects of the disaster. Hardworking Haitian bureaucrats within the health ministry, as well as overwhelmed doctors, nurses and scattered local officials, are doing all they can with the meagre resources available.

Prime minister Henry, eager to show the eviscerated central government still exists, is trying to assert control over international aid, and has promised substantial oversight so as not to repeat the disastrous experiences of 2010. Ordinary Haitians, self-reliant as they are, can only hope to see some follow-through this time – to help them strengthen their homes and lives before the next disaster strikes.