WASHINGTON, DC–December 23rd, 2020 (The Guardian)–The wife of America’s top public health official, herself a National Institutes of Health bioethicist, had to get creative this year

Not that this is the time to throw a huge party. Not when the longtime director of the National Institute of Allergy and Infectious Diseases (NIAID) has been the leading voice calling for faithful adherence to social-distancing measures.

Even so, Fauci’s wife of 35 years, Christine Grady, the top bioethicist at the National Institutes of Health, wasn’t going to lose out on the chance to give her husband an ethically sound surprise. 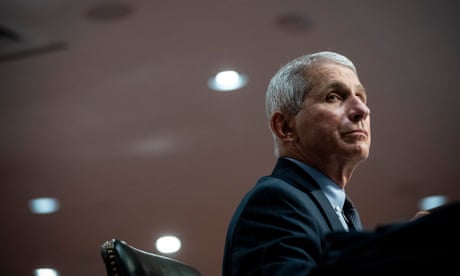 ‘New disease, no treatment, no cure’: how Anthony Fauci’s fight against Aids prepared him for Covid-19

“She is a genius at fooling me,” Fauci told the Guardian. “I mean, it’s very tough to fool me. But she threw surprise birthday parties for my 50th, 60th and 70th birthdays. By having me at work and then all of a sudden, ‘Come on home. We’ve got to do something. You gotta go out to dinner.’ I walk in the house and there are people who come from all over the country.”

This year the couple agreed with their three adult daughters, who live in different cities, that as with Thanksgiving, there would be no traveling back home at Christmas, no in-person birthday fête with the patriarch.

“Because I have been telling the country to limit travel,” Fauci said, “and I don’t want to be one of those health officials who tells the world to do something and then they go out and have a party themselves.”

So, skirting scandal by simply practicing what her husband wisely preaches, Grady told Fauci that on Christmas Eve the two of them would have a quiet birthday dinner at home and then celebrate with their children online.

Fauci works seven days a week. This past Sunday, Grady told her husband he had to get home from the office by 5.30pm, so they could have their usual weekend check-in with their daughters.

“So as you know, I’m protected by federal agents because of the threats on my life here,” Fauci said, referring matter-of-factly to one of the more extraordinary and alarming facts of his life under a global pandemic and the rise of rightwing extremism.

The agent, he said, persisted: “No, no, no. Your wife said you gotta be home at 5.30.”
“I should have known what’s going on,” Fauci said. But the birthday boy still had no idea something sneaky was afoot.

And so, the clueless Fauci wound up walking into his home office to find that – “Surprise!” – a Zoomed-in matrix of 15 or so of his closest friends was crying out from his computer.

Grady had arranged for them to dial in, from across the US as well as from Italy, Switzerland and the Caribbean, all to celebrate the man who even now, a newly minted octogenarian, is centrally responsible for helping ensure birthday parties a year from now might be held safely in person again.

“So what am I doing for my birthday?” he said. “I’ve already done it.”