Necocli, Colombia (CNN)  They travelled by the thousands to arrive here from Haiti, Venezuela, Chile, Brazil, and even further, from Ghana, Mali and Togo. Now they’re stuck.

Migrants start lining up on the beach of Necoclí, on the Caribbean coast of northern Colombia, in the early morning. Before them is the Gulf of Urabá, a stretch of the Caribbean Sea that interrupts their long trek northward toward the United States.
Once they cross — if they cross — they face a 60-kilometer trek through the jungles of the Darien Gap to reach Panama, and eventually Costa Rice and Nicaragua. If they survive that far, they will join the mass flows of desperate people walking north through Central America, all on their way to US-Mexico border. 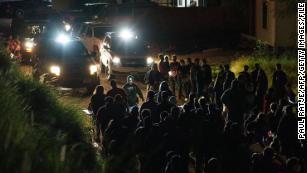 But for now, the hopeful travelers at Necocli are at an impasse. There is only one ferry company here that can take migrants across the gulf, and its capacity is stretched to the limit.
“We try to move eight or nine hundred migrants per day, but it’s hard. Normally it’s three or four hundred people, maybe five, but now is nine hundred people day after day after day. I’ve never seen something like this before,” says Edward Villarreal, who works as a translator for ferry company Caribe S.A.S.
Over the last few weeks, up to 15,000 migrants have arrived in Necocli, according to the Colombian ombudsman’s office. The town, which normally has a population of just 22,000, is at a breaking point. “All of the health system, public and food services have collapsed,” Necocli Mayor Jorge Tobon told local media last week.
Caribe S.A.S now has a waiting list of more than 8,000 travelers who have purchased tickets but now have to wait for the next available spot. Tickets are sold out until August 10, Villarreal told CNN. 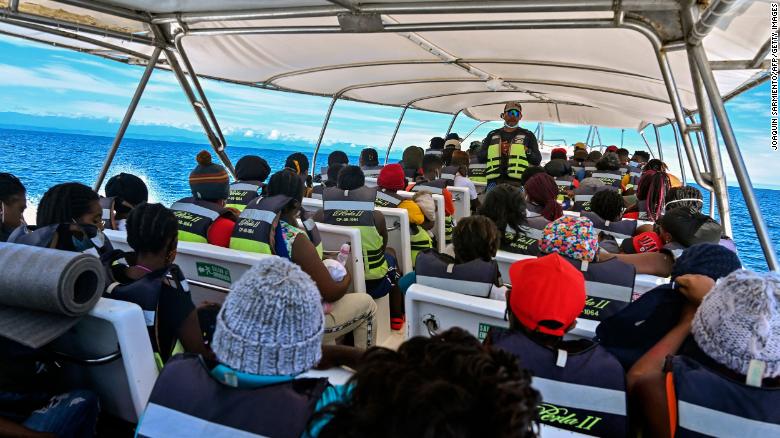 Stranded migrants from Cuba, Haiti and several African countries travel on a boat from Necocli to Capurgana, Colombia, on July 31, 2021.

Most of the people that attempt this journey are searching for a second opportunity, according to CNN interviews with dozens of migrants as well as town authorities.
Edem Agbanzo, 30, has a culinary degree and first migrated from Togo to Ghana to work as a chef. But after a year, violent clashes between Muslim and Catholics in western Africa forced him to flee, he said.
In 2019, he flew to Chile and found informal work as a gardener — then lost it again when the Covid-19 pandemic exploded. After waiting for the country to reopen for more than a year, he and a friend hit the road on July 17.
“We decided to go to the US because the new president offered an opportunity for people who are suffering and don’t have stability in their own country to move there and explain their case. If you’re eligible to be accepted, you can stay,” Agbanzo told CNN, despite the Biden’s administration’s recent admonishments to migrants: “Don’t come.” 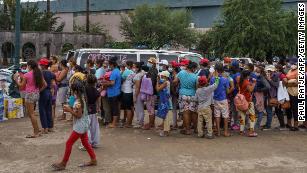 US is running more than 30,000 radio ads a month to deter migration from Central America
Agbanzo hopes to move to Georgia, where he has relatives that can sponsor his visa application
His story is similar to that of thousands of migrants in Necoclí, the vast majority of whom are Haitians who had previously settled in other South American countries like Brazil and Chile but have been uprooted by economic pressures amid Covid-19 lockdowns and work restrictions.
Many worked informal jobs before the pandemic, and were especially vulnerable to falling into extreme poverty as economies tightened last year.
Georgina Ducleon, originally from Haiti, lived in Rio de Janeiro for more than six years, she told CNN. She is now travelling with her two young children. Both are under the age of five and have Brazilian citizenship.
Their family lost their income when the pandemic broke out and Rio entered lockdown, Duclean says, and they no longer believe a future is possible there.
She is scared of the jungle and long trek ahead. “But we put our lives in the hands of God and, with his help, we are going to triumph,” she told CNN. 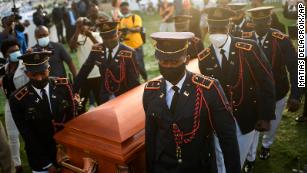 Fear stalks Haitians as their murdered president is buried and gangs terrorize the capital
Local authorities are particularly concerned for migrants of Haitian origin, who tend to travel with their families, according to Juan Francisco Espinosa, Director of Migration Colombia.
“We need to make sure to provide protection to all these people and in particular to children on the road,” Espinosa said last week.
The Colombian Red Cross has set up a tent on the beach to help migrants understand their options. “Our priority is giving them information, many have no idea of where they are going or have very little travel plans,” says Red Cross volunteer Diana Marcela, herself a native of Venezuela who moved to Colombia in 2016.
“I share a lot of their pain… I know how they must be feeling,” she said of the migrants. 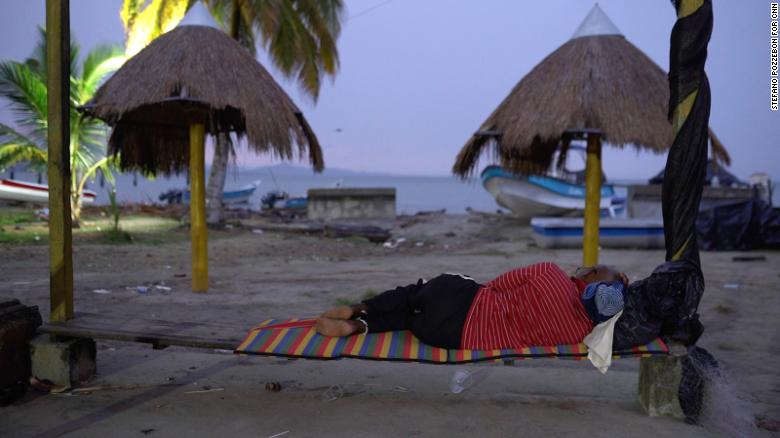 A migrant sleeps on the beach in Necocli on July 31, 2021.
Among the services provided by the Red Cross is a free Wi-Fi spot where migrants can connect to the internet. Much of the trip planning happens on WhatsApp chats where migrants share tips and warn of dangers ahead.
Esteban Nuñez of Ciudad Bolivar in Venezuela is in five group chats. He showed CNN a shared video of successful migrant who recalls his journey through Panama and Mexico, before finally arriving in New York’s Times Square.
But in another group, a woman’s voice message shares a different experience: Her group was robbed twice in the jungle, and she says she witnessed corpses, mutilated bodies and multiple rapes in the deep forest.
Most advice in these groups relates to money and how to make the journey cheaper. Nuñez said he spent 180 US dollars on equipment and provisions preparing for his journey, including a tent, walking shoes and mattress. The trip to Necoclí alone cost him the equivalent of $200 in bus fare, food and accommodation.
A flight from Bogota to Panama City costs as little as 75 US dollars — but it is not an option for migrants who are travelling without papers or who don’t have a valid visa to Panama. 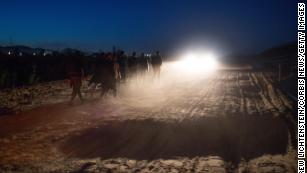 White House outlines ‘hard-nosed approach’ to tackling root causes of migration
Remi Wilfor, a Haitian who used to live in Chile, dreams of one day reaching Brooklyn, New York, where an aunt lives. But after cashing out all of his savings in July — the equivalent of $900 US — he has already spent $800 just to reach Necocli.
He’s terrified now trying to make the rest of the trip with only 100 US dollars.
On Saturday, Colombian Defense Minister Diego Molano travelled to Necoclí. He pledged the Colombian Navy would build an emergency pier to relieve stress on the town, by allowing more boats to pick up the migrants and ferry them across the gulf.
But he also stressed that the issue requires a bigger solution. Foreign governments in the region must organize talks to regulate the flow of migrants, as more and more people flee economic misery exacerbated by the pandemic, he said
- Advertisement -