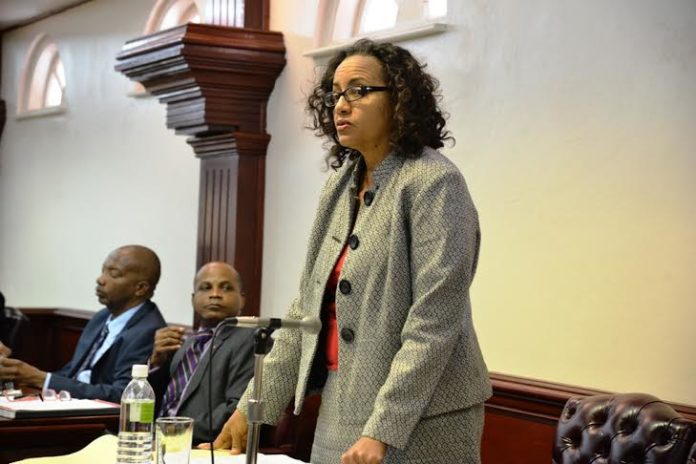 Basseterre, St. Kitts – The impact of gun violence in St. Kitts and Nevis is taking a physical toll on the staff at the JNF Hospital as well as on social services in the federation.

That’s the opinion of the minister of health and social services, Senator Wendy Phipps, who spoke in the National Assembly to lend support to a bill that will introduce stiffer gun penalties on convictions, stating that these ministries, as well as the Ministry of National Security, continue to be heavily impacted by crime and violence, including those crimes involving the use of guns.

“In my 2017 budget, I would have taken time out to illustrate the heavy toll that crime and gun-related violence would have had on our health and social services infrastructure,” she said. “As the gravity and impact of crime and violence of our communities has indeed not lessened, it has become worse.”

Phipps stated that crime continues to play on the health infrastructure of St. Kitts and Nevis and stated that 28 cases of gunshot wounds were reported to the hospital last year, with 13 of them requiring surgery, and most of the victims were young men, several of whom were repeat victims.

“In a number of cases, we suffer the misfortune of having to patch up victims of gun violence, only to have them reappear within a short time with similar life threatening injuries,” Phipps said.

The senator also highlighted the impact emergency calls continue to place on the surgeons, the ICU, the EMT workers and the other staff at the hospital.

“Many [of these employees] would have already invested a full day’s work,” she said, “only to be called out again to address these crime-related emergencies. The physical toll on such health care workers [is] relatively high. After such [a] long-haul shift, the same health care workers are expected to be out the following day to begin the work routine all over again, regardless whether they are well rested or sleep deprived.”

She added that the impact even goes beyond the health care workers, saying it also creates a considerable burden on the entire health care system.

“When one takes into account the operational cost at the hospitals, the use of the ambulance, the A&E department, preoccupation with victims of gun violence at the expense of other, perhaps less critical patients seeking care, medication, hospitalization, lab test and depletion of precious blood reserve,” Phipps said.

“In a number of these cases, the patients of gun violence are ill-equipped to settle their bills with the hospital, although the cost of their care can often be astronomical,” she added. “Add to this the general feeling of fear and discomfort among our institution-based health workers who must render care to victims of gun violence who may still be the target of future assaults even within the walls of the hospital.”

She further explained how gun crimes may impact social services in the federation, adding that the situation is even worst when such victims of gun violence are known or suspected criminals themselves. “We are well aware that crime of any kind results in no winners,” Phipps said. “Neither the victims nor perpetrators benefit in the long run. The families of perpetrators of gun violence are often as equally as vulnerable as the victims and their families in both cases [require] intervention.”

She stated the intervention ranges from counselling service to mentorship for young family members.