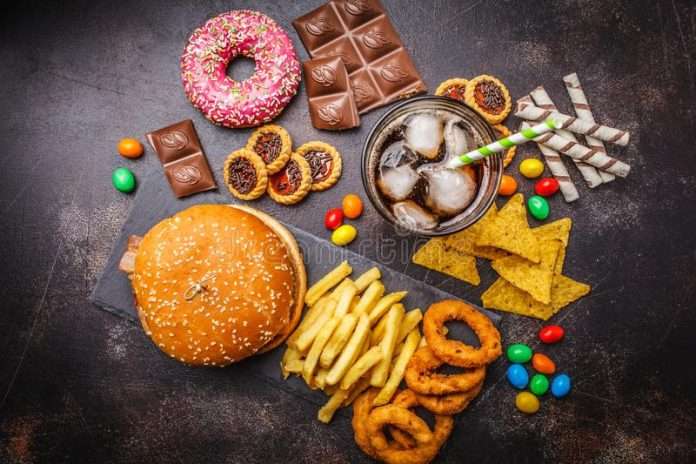 Ministers are being urged to levy a £3bn sugar and salt tax as part of a “once-in-a-lifetime opportunity” to break Britain’s addiction to junk food, cut meat consumption by nearly a third and help tackle climate change.

The government-commissioned National Food Strategy, drawn up by the restaurateur Henry Dimbleby, says the UK population’s “malfunctioning” appetites and poor diets – fuelled by consumer and manufacturer’s reliance on processed food – place an unsustainable burden on the NHS and contribute to 64,000 deaths each year.

Its most eye-catching recommendation is a levy of £3 a kilo on sugar and £6 a kilo on salt sold wholesale for use in processed food, restaurants and catering, which it says would be a world first. This would raise up to £3.4bn a year, some of which should fund an expansion of free schools meals to an extra 1.1 million children and an overhaul of Britain’s food and cooking culture.

The proposal, which could put 1p on a bag of crisps and 7p on a Mars bar, was criticised as regressive as it would hit the poorest consumers hardest. However, Dimbleby believes the tax would incentivise manufacturers to reduce salt and sugar levels by reformulating products.

The strategy underlines the damage caused by the food and farming sector to nature and the climate. “Our eating habits are destroying the environment, and this in turn threatens our food security,” it states. “The next big shock to our food supply will almost certainly be caused by climate change, in the form of extreme weather events and catastrophic harvest failures.”

Ministers must accelerate changes in people’s eating habits and food culture if the UK is to meet its targets on health, climate and nature, it says. The UK’s consumption of meat and ultra-processed food would have to drop by nearly a third and its fruit and vegetable intake rise by 30% by 2032.

Cutting current levels of meat consumption would reduce the greenhouse gas emissions and other pollution from livestock and free up farmland for forests and peatlands that can absorb carbon dioxide, as required to meet the UK’s net zero emissions target by 2050.

The strategy rules out a meat tax, which proved much more unpopular in a survey than the salt and sugar taxes, calling it “politically impossible”. Instead it suggests “nudging” consumers away from meat, such as by putting veggie sausages alongside meat ones, which is known to push sales up. It also backs plant-based meats as replacements in processed foods.

Brexit also figures in the strategy, which calls on ministers to guarantee high food standards in future trade deals. Lower standards would “mean exporting all the environmental harms we wish to avoid, while undercutting – and potentially bankrupting – our own farmers,” the report says.

Dimbleby said the pandemic had been a “painful reality check”, with obesity a major factor in the UK’s high Covid death rate. The UK is the third fattest among the world’s richest nations, with three in 10 of the adult population obese.

Describing the food system as a “logistical miracle” and a “disaster”, Dimbleby said government interventions were key. “Education and willpower are not enough. We cannot escape this vicious cycle without rebalancing the financial incentives within the food system.”

He added: “Some of our recommendations will be met with protests from those industries whose business models are shaped to fit the current food system. Change is never easy. But we cannot build a sustainable, healthy and fair food system by doing business as usual.”

Other key food strategy recommendations include:

The chef and campaigner Jamie Oliver said: “This is no time for half-hearted measures. If both government and businesses are willing to take bold action and prioritise the public’s health, then we have an incredible opportunity to create a much fairer and more sustainable food system for all families.”

The independent National Food Strategy was commissioned in 2019 by the then environment secretary, Michael Gove, and produced an interim report last year. The government has promised to produce a white paper in response within six months.

Dimbleby was a co-founder and shareholder in the Leon restaurant chain in 2004 along with businessman John Vincent. The chain was sold in April for £100m. He was previously commissioned by Gove to write the School Food Plan in 2013, which led to the partial reintroduction of free school meals in primary schools.

Luke Pollard, the shadow environment, food and rural affairs secretary, said: “This is a massive wake-up call to fix Britain’s broken food system … The government should be working to ensure every family can afford for their children to get a healthy hot meal every day. Britain’s high food and farming standards must be protected in law not watered down in trade deals.”

The environment secretary, George Eustice, thanked Dimbleby for the report and said the government would respond within six months setting out priorities for the food system.

Dominicans Get Third Vaccines as Virus Rages in Next-Door Haiti

The Delta Variant Is the Symptom of a Bigger Threat: Vaccine Refusal