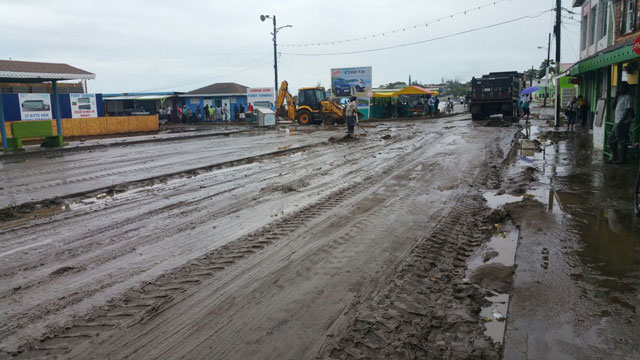 Basseterre, St. Kitts – A tropical wave’s severe weather brought heavy rains to St. Kitts and Nevis Thursday morning as it passed over the Leeward Islands, leaving authorities with a mammoth clean-up operation in the coming days.

The heavy rains caused the overflowing of ghauts and forced the government to close all its offices and schools very early in the day.

The inclement weather also forced the Allure of the Seas, the largest cruise ship in the world, to make an early departure.

Many citizens and residents took to social media to share some of the damage due to the flooding .

However, with an improvement in conditions on Thursday afternoon, some clean up operations were already on the way on the Bay Road in the vicinity of the ferry terminal, where mud had accumulated, forcing parts of the that road to be closed.

An official from the met office stated on the radio the reasons behind the amount of rain received: “We didn’t anticipate as much rain as we did receive,” he said. “The forecast initially, when they did their analysis in Antigua, would have been estimating between 1 to 2 inches of rainfall.”

He added that based on early indications, it seems that there may have been in excess of 5 inches of rainfall recorded at the airport.

The met officer noted that more shower activity is expected, and he is not ruling out heavier showers. He also called on individuals in low-lying areas to exercise caution in flood-prone areas.