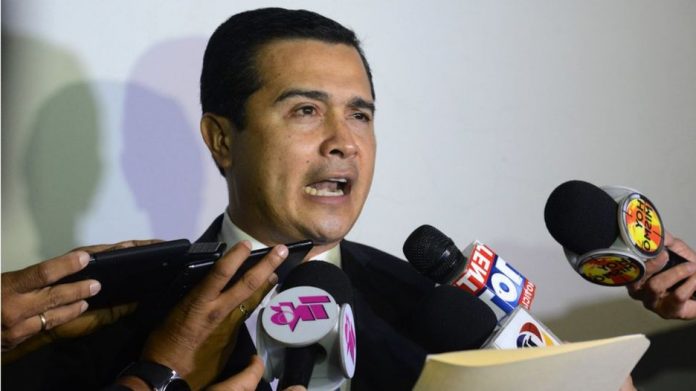 BBC– A jury in New York has found the brother of Honduran President Juan Orlando Hernández guilty of drug smuggling.

Juan Antonio “Tony” Hernández, 41, was arrested in November 2018 in Miami. Prosecutors said the former Congressman had used his government connections to smuggle cocaine through Honduras to the US.

Dismissing the verdict as “inconsistent with the truth”, his attorney said they would appeal against the ruling.

On Friday, supporters of Hernández were met with protesters as they left the courthouse, US media report. Some chanted “Fuera JOH,” meaning “Out with JOH”, referring to the initials of the Honduran president.

What was he found guilty of?

A former Honduran congressman, Tony Hernández, 41, was convicted on four separate charges, including drug conspiracy to import cocaine into the US and weapons offences.

Assistant US Attorney Jason Richman said during the trial that he was part of a “state-sponsored organisation” that distributed cocaine in the US for years, and that corrupt “mayors, congressmen, military generals (and) police chiefs protected” him.

Some of the cocaine he transported was said to have been labelled with his initials “TH”.

He was also found guilty of providing heavily-armed security for the drug shipments. The drug smuggling network is said to have operated in Colombia, Honduras and Mexico using planes, speedboats and a submarine.

The 50-year-old president was not charged in the case and has consistently disputed the charges against his brother.

President Hernández is facing growing calls to step down following the release of a court document linked to his brother’s case. It alleged that his 2013 presidential campaign had been financed by drug money, and labelled him as a co-conspirator

He denies the claims. The president was re-elected to a second term in 2017 in polls which his opponents said were fraudulent.

Honduras is a major transit route for cocaine smuggled from Colombia and other South American nations to the US. Thousands of Hondurans have left the country in recent years.