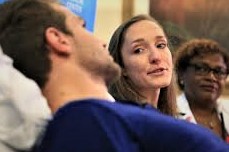 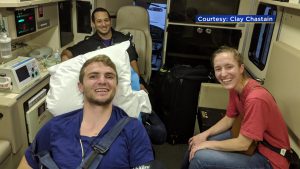 Newlyweds Clayton and Acaime Chastain never imagined their honeymmon on St. Kitts  would wind up with a Go Fund Me campaign to pay for medical bills…the price of trying to explore the island’s dormant volcano.

When she started her honeymoon on St. Kitts, Acaimie Chastain was afraid of heights.

But she would soon find herself facing her fear, descending into the crater of a dormant volcano to rescue her new husband, Clayton Chastain, who had fallen in on a hike, and, severely concussed, no longer knew where he was.

“So I just looked at him and I said, ‘We’re gonna have to climb,’” said Acaimie, 25, who had to drag him back up the side of mountain until they could get enough cell service to call 911. “You’re gonna have to help me climb out of here.” 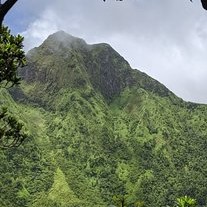 Screaming for help on an empty trail as Clayton vomited blood every 10 minutes, 5-foot, 2-inch Acaimie pushed her 5-foot, 10-inch husband through the woods for three hours.

The newlyweds were hiking up Mount Liamuiga on July 17, taking pictures and enjoying the lush, deserted landscape. Clayton decided to venture into the crater, while she hung back. Using ropes to steady himself, he slowly descended the 60-degree slope into the crater.

But something went amiss, and he wound up at the bottom of the crater, a 50- to 70-foot drop.

“The next thing I notice I’m sitting on the ground with my head between my knees and vomiting up blood and there’s blood all down my shirt,” said Clayton, who said he didn’t remember how he got there.

Back outside the crater, Acaimie heard her husband’s faint cries for help. She climbed in and followed his calls. When she found him, he was so disoriented it was as if he were intoxicated, she said.

“The whole time, the only question he has for me is, ‘Where are we?’” she said, tearing up, as she and her husband recalled their ordeal on Friday. “It really freaked me out, like he doesn’t even know what’s going on. And then I told him, ‘We’re gonna have to go a long way back down the mountain. We’re going to have to keep climbing.”’

Clayton believes that a rope snapped, though they will never know for sure.

When an ambulance finally reached them, they were rushed to one of the few hospitals on the Caribbean island, Joseph N. France General Hospital. Flying through the one-lane roads at 70 to 80 miles an hour, the ambulance weaved around other cars and forks in the road.

But at the small hospital, Clayton was misdiagnosed.

Realizing they needed to return to the States, the couple paid to be airlifted from St. Kitts to Broward Health Medical Center, which held a press conference Friday in which the couple told their story.

At Broward Health, doctors found Clayton had a fracture in the second vertebrate of his spine, at the base of his skull. Spinal fluid was leaking into his sinuses.

He’s expected to recover from his injuries, according to Dr. Maxine Hamilton, medical director of Broward Health’s international program. He will be discharged “as soon as possible,” at which point the couple can return to their home in Indianapolis.

GSupportetting the couple back into the U.S. was not covered by their insurance. Acaimie’s sister, Sabrina Catron, started a GoFundMe campaign in response. The campaign raised nearly $36,000 over six days, with more than 370 people donating, helping to pay for the air ambulance and medical costs.

“We’re just so, so thankful to everyone back home, all the support we received. It’s been so overwhelming,” Acaimie said.