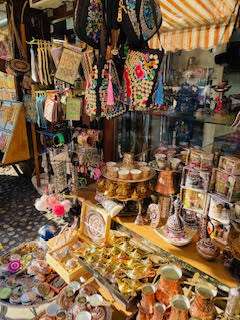 About six years ago, I motorcycled across several Balkan countries, heading northward from Turkey and finishing in Italy. One of the area’s most fascinating countries I visited was Bosnia Herzegovina, especially the city of Sarajevo. I knew then that I’d someday return.
And I did, just over a month ago this year. The changes I saw from the last time I was there were nothing short of dramatic. But they were also subtle. New modern style buildings, numerous five star hotels, tree-lined streets, and amazing local handicraft shops. Yet everything blended together. History had been preserved. And, most important of all, the city was obviously thriving. There were hordes of tourists, top class restaurants, wine shops, guided tours, and river cruises. Mosques and churches were just as busy, a shining example of mutual respect no matter what one’s religious beliefs.
Even so, the past is there for anyone to see, a reminder of the city’s darkest days.
But today, just like the bridge, hatred is a thing which belongs to the past. We can all learn from Sarajevo.