They will be remembered as India’s lost months: the stretch between September and February when Covid-19 cases in the country defied global trends, falling sharply throughout the coldest months of the year until they reached four-figure daily totals.

It was inexplicable. Was it the Indian climate? A protection conferred by childhood immunisations? Some speculated India may have naturally reached herd immunity. It was a tantalising idea that took hold in India’s highest circles of policymaking, media and science – even a government-commissioned study suggested herd immunity may indeed have been achieved. It would prove one of the most fatal miscalculations of the Covid-19 pandemic so far.

Now, with daily cases crossing 360,000, and recorded deaths beyond 3,200 per day, many see the lull between Covid-19 waves as a cruel illusion. “The elections, religious festivals and everything else opened up completely,” says Sujatha Rao, a former secretary of the Indian ministry of health and family welfare. “That was a very bad mistake and we have paid a very dear price, a heavy price for that oversight.”

An outbreak the size of India’s second wave, apparently fuelled by Covid-19 variants that appear to be more infectious than earlier strains, would have overwhelmed most public health systems – let alone one of the most chronically underfunded in the world, serving a vast, spread-out population.

But public health experts, including some involved in advising the government, say the scale of India’s current outbreak was also partly manmade, the result of a feeling of exceptionalism that emanated from the top of the Indian government and rippled across society, leading to countless administrative and personal decisions that, within a few months, would prove disastrous.

“There was a misreading of the situation in January that we had attained herd immunity and were unlikely to see a second wave,” says K Srinath Reddy, the president of the Public Health Foundation of India. “India went into full-blown celebratory mode. And we know the virus travels with people, and celebrates with crowds.”

The virus travels with people, and celebrates with crowds    K Srinath Reddy

Alongside warnings that people should maintain precautions, governments at all levels relaxed restrictions, allowed massive social events to resume and pressed ahead with raucous electioneering, confident the continued circulation of Covid-19 in states such as Kerala or Maharashtra were the dying embers of the virus, not evidence of the sparks that would ignite a second firestorm.

“There was a lot of mixed messaging coming through which made people very complacent,” Shahid Jameel, a virologist at Ashoka University, told a forum there on Tuesday. Some politicians and scientists boasted of low infection and death rates that gave Indians the impression “that somehow we are special”, Jameel added. “We are not special.”

Given India’s youthful population, Covid-19 death rates were expected to be smaller than elsewhere. But official numbers during the first wave were exceptionally low. In Karnataka, a state with a similar population to France, seroprevalence studies have suggested nearly half of people were infected by August. Yet the state’s Covid-19 death toll was about 12,000 last year, compared with the more than 60,000 people who died from the virus in France over the same period.

Studies are already beginning to understand the extent to which official Indian records of that time were unreliable. Ramanan Laxminarayan, the founder and director of the Centre for Disease Dynamics, Economics and Policy in Washington DC, told the Ashoka University panel that a forthcoming study of Indian mortality rates suggested the country had not escaped the first wave so unscathed.

“[The study shows] Indians are not exceptional at all,” he said. “In fact a lot of our mortality is in that 40-70 age group, where our mortality rates are higher than for other countries.”

The belief that India may have shaken off Covid-19 for good was bolstered by some scientists. Members of a committee established by the government to create a “supermodel” of Indian cases published a study in September claiming their model showed India may have already reached herd immunity. Others made a similar argument in newspaper columns.

“The idea that India had hit herd immunity, that we only needed to be careful and we could eradicate the virus by February, and the implicit assumption that Indians were ‘exceptional’ in some way – in that most of those infected would be asymptomatic as a result of genetics or prior exposure – all of this was wrong,” says Gautam Menon, an expert in disease modelling at the Institute of Mathematical Sciences in Chennai.

It was part of a stream of scientific advice flowing to the government, including more critical views warning there were still hundreds of millions of susceptible Indians, and that future strains of the virus could be more aggressive, as they had been in Europe and the US.

“But you must understand in which environment this advice landed,” Reddy said. “The Indian economy had gone into a slump before the pandemic. It had challenges during the pandemic, and it was just beginning to show some signs of recovery. There was some sense of urgency by the people in charge of the Indian economy, as well as industry leaders, to put it back on the rails.”

In that context, and with case numbers continuing to drop, “people heard what they wanted to hear”, says Reddy, who sits on the government’s national scientific Covid-19 taskforce.

By late February, with official caseloads dwindling, life in India had been allowed to return to something close to normal. Malls in Delhi and Mumbai were busy. Crowds filed into cricket stadiums, including the largest in the world, named after the Indian prime minister, Narendra Modi.

In spite of warnings in November by an Indian parliamentary committee that the numbers of beds in government hospitals was “abysmally small”, four temporary hospitals in the capital were dismantled, according to the Indian Express, along with an 800-bed hospital in Pune and a Covid-19 facility in Assam state.

“There was this huge window of opportunity to really set ourselves up,” Rao says. “The time could have been used on a very focused approach to scale up readiness for wave two. [But] we thought we were over the worst and had managed it.”

For a stretch between 11 January and 15 April, the country’s national scientific taskforce on Covid-19, which advised on quarantine policies and testing and treatment protocols, did not hold a single meeting, according a report in the Caravan, confirmed by the Guardian.

‘God will overcome the fear of the virus’

In West Bengal, a state considered a prize for Modi’s ruling Bharatiya Janata party (BJP), India’s election commission overruled opposition parties and gave permission for the country’s longest-ever regional election campaign, along with elections in four other states and territories. Modi himself boasted of the size of the crowds he would address in the weeks to come. By the beginning of this week, West Bengal had the fastest growing Covid-19 outbreak in India. On Thursday, voting went ahead anyway.

We thought we were over the worst and had managed it

Approval was also given for the Kumbh Mela, a religious festival in a north Indian city on the banks of the River Ganges that would draw millions of Hindu pilgrims. For the BJP, a party that seeks to give primacy to India’s Hindu heritage, the go-ahead for the festival was highly symbolic. The event was advertised as clean and safe on the front page of national newspapers in advertisements that bore Modi’s face.

Tirath Singh Rawat, the chief minister of the state where the Mela was being held, encouraged as many as possible to come. “Nobody will be stopped in the name of Covid-19, as we are sure the faith in God will overcome the fear of the virus,” he said. Recorded infections in the state have jumped 1,800% over the past 25 days.

In its public statements, few groups were more certain in their conclusion that the pandemic was over than the ruling BJP. At a meeting of its national executive early in the year, with its eye on the upcoming elections, the party issued nothing less than a victory cry.

In the face of the world “speculating over how India with its vast population and limited healthcare infrastructure” would deal with the pandemic, according to a party resolution, it could be “said with pride that India [had] defeated Covid under the able, sensitive, committed and visionary leadership of Prime Minister Narendra Modi”.

The resolution was issued on 21 February, a day when 14,199 cases were recorded across India. Two months later, the figure would be 314,644.

The same feeling that the worst was over seemed to influence a lack of urgency in the country’s vaccination programme. Despite having almost a year to build vaccine infrastructure to reach Indian adults, the rollout started slowly. The government trumpeted vaccine giveaways to rival China’s influence in south Asia, while getting its hands on fewer than a hundredth of the doses required to vaccinate India, counting on securing the rest later as younger groups become eligible for shots.

There had been dissent to this triumphalism among the country’s top scientific advisers, according to several sources, but in public they strove to put the best face on the situation. Such an impulse was not unique to the Indian outbreak, but was so distinct there that the Lancet warned in a September editorial that persistent “false optimism” risked undermining the country’s response.

“We don’t know what they did behind closed doors, but in the weekly Covid briefings of the health ministry, [advisers] came out day after day giving us data about how cases per millions and deaths per million in India were the lowest in the world,” said Abantika Ghosh, the health editor of the Indian news website the Print.

“But they would give us numbers of testing and vaccinations in absolute numbers, because in a per-million setting, they don’t look impressive, they’re quite low. Questions were sidestepped. There was this compulsion, it seemed, to look away from science, from evidence the world over and just establish that India is different.” 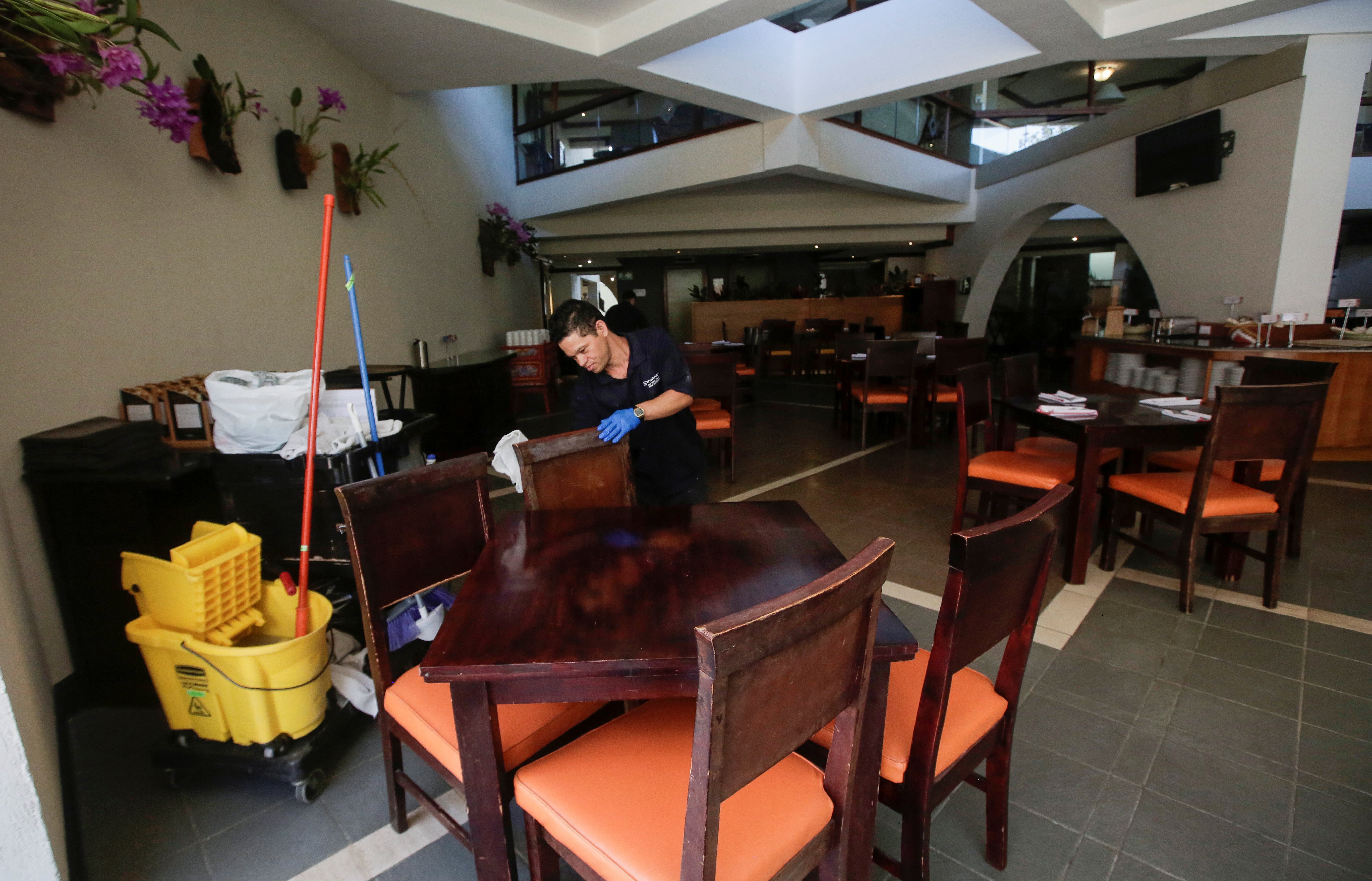 Costa Rica will for the next week close non-essential businesses, including restaurants and bars, across the center of the country due to a sharp increase in new cases of COVID-19 and hospitalizations, the government said on Thursday.

From May 3-9, restaurants, bars, department stores, beauty salons, gyms and churches must close in 45 municipalities in central Costa Rica, where almost half the population lives and over two-thirds of new cases have been registered.

“We are in an unprecedented situation, and many people are going to die,” Health Minister Daniel Salas said after announcing 2,781 new daily infections, a record number. “There are already waiting lists to enter intensive care.”

The government will also impose travel restrictions during the week.

Some 10.5% of the population had been vaccinated as of Thursday, most of them over the age of 58, official data show.