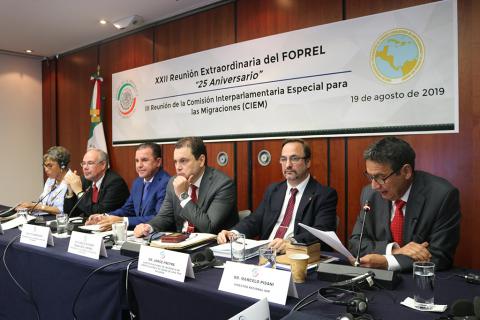 Marcelo Pisani (right), IOM Regional Director, highlighted the importance of the Regional Framework Law on Migration, before the presiding officers of legislative assemblies of Central America and the Caribbean Basin.

Mexico City – A Regional Framework Law on Migration, with a Human Rights Approach has been approved XXII Special Meeting of The Forum of Presiding Officers of Legislative Assemblies of Central America and the Caribbean Basin (FOPREL).

According to International Organization for Migrtation (IOM) figures, at least 21 million Central Americans, Mexicans, Puerto Ricans and Dominicans live outside their countries. Another three million people live as migrants in the same region. The framework law was developed for safeguarding these people’s human rights, along with the welfare of the communities that saw them leave and those that host them.

The Framework Law was developed with the support of the International Organization for Migration and other multilateral and civil society organizations and will have an impact throughout the region. It will serve as a reference for strengthening the already existing regulatory frameworks in each country. That strengthening process will be carried out by the sovereign legislative body of each of the countries represented in the FOPREL.

“The framework law on migration matters is due to a mandate from the presidents of the member parliaments of our organization,” said Santiago Rivas, Executive Secretary of FOPREL. “It is transcendental for us since it compiles all the international treaties that the member countries of FOPREL have ratified and places a special emphasis on the human rights of migrants.”

The Framework Law was signed by the presiding officers of the legislative powers of Central America, the Caribbean, and Mexico at the headquarters of the Congress of the United Mexican States and has become the first instrument approved at a regional level as a model to develop national standards for migration governance.

“In the region we have at least four challenges in this field: addressing the causes of irregular migration, generating conditions for return, creating regular migration channels and fighting xenophobic discourse,” said Marcelo Pisani, IOM Regional Director for Central America, North America, and the Caribbean. “This Framework Law will help participating states face these challenges and will contribute to harmonizing their legislative frameworks.”