CNN- Texas Gov. Greg Abbott said Thursday he has directed the Texas Department of Public Safety and the Texas National Guard to shut down six points of entry along the US-Mexico border amid a surge in migrants.

The Republican called the crisis dire and said “agents are overwhelmed by the chaos” at the border.

“The sheer negligence of the Biden Administration to do their job and secure the border is appalling. I have directed the Department of Public Safety and the Texas National Guard to surge personnel and vehicles to shut down six points of entry along the southern border to stop these caravans from overrunning our state,” Abbott said in a statement.

“The border crisis is so dire that the U.S. Customs and Border Protection is requesting our help as their agents are overwhelmed by the chaos. Unlike President Biden, the State of Texas remains committed to securing our border and protecting Americans.”

Department of Homeland Security spokesperson Marsha Espinosa told CNN on Thursday that it “is not seeking assistance from the State of Texas to shut down ports of entry,” adding that “it would be a violation of federal law for the Texas National Guard to unilaterally do so.

Earlier in the day, Texas Department of Public Safety Regional Director Victor Escalon said that all the points of entry to Del Rio, Texas, will be shut down due to the overwhelming number of migrants there.

“Six, seven days ago, Del Rio saw 400 migrants sitting, underneath the bridge, the (point of entry) in downtown Del Rio … there’s about 6,000 sitting there right now and more are coming,” said Escalon.

“Before I came here today, my last instructions are, we’re going to shut down all the POEs in Del Rio,” he said, following an update on Operation Lone Star.

CNN previously reported Del Rio Mayor Bruno Lozano said there were over 8,500 migrants under the Del Rio International Bridge waiting to get processed.

According to the US Customs and Border Protection website, the “Del Rio Sector is responsible for detecting and preventing the smuggling and unlawful entry of undocumented immigrants into the United States along 245 miles of the Rio Grande River and Lake Amistad that forms the border between the U.S. and Mexico. The area covers 55,063 square miles of Texas, and reaches 300 miles into Texas from the U.S.-Mexico border.”

The crisis at the southern border has been a key focus of the Biden administration, though President Joe Biden has had to contend with losses in court cases over some of the policy changes they have made

On Thursday, a federal judge blocked the administration from turning away migrant families with children under a public health order related to the coronavirus pandemic, marking a defeat for the administration which has relied on the order amid an influx of arrivals. The order takes effect in 14 days.

And last month, a federal judge in Texas ordered the administration to revive a Trump-era border policy that required migrants to stay in Mexico until their US immigration court date. Biden had ended the program earlier this year.

Meanwhile, border arrests remain at the highest level in decades, reaching one million before the end of the fiscal year and more than 208,000 in August alone. Some of those apprehended at the US-Mexico border are repeat crossers.

This story has been updated with additional details Thursday.

CNN’s Priscilla Alvarez and Devan Cole contributed to this report.]

Del Rio Mayor Bruno Lozano said that as of early Thursday evening 10,503 migrants were under the Del Rio International Bridge, up from 8,200 in the morning.

Food and water has been scarce, around 20 migrants told Reuters, and temperatures have risen to around 99 Fahrenheit (37 Celsius). Reuters witnessed hundreds of migrants wading through the Rio Grande river and back into Mexico to stock up on essentials they say they are not receiving on the American side.

The migrants are mostly Haitians, with Cubans, Venezuelans and Nicaraguans also present.

The squalid conditions are reflective of the humanitarian challenge facing Biden as border arrests hover around 20-year highs. U.S. authorities arrested more than 195,000 migrants at the Mexican border in August, according to government data released on Wednesday.

Ernesto, a 31-year-old Haitian migrant, slipped back into Mexico on Thursday to buy water and food – for the fourth time, he said, since arriving in the United States on Monday morning. Ernesto, who declined to give his surname to protect his identity, said he and his 3-year-old daughter had not been fed at the camp, where migrants are jostling for shade.

Sometimes, he said, he runs to avoid Mexican migration officials but is usually not bothered by them. “But now money is running out,” he added.

Migrants showed Reuters tickets with numbers they had received from U.S. Border Patrol. Several said other migrants told them they could be stuck at the camp for up to five days.

Border Patrol said in a statement it was increasing staffing in Del Rio to facilitate a “safe, humane and orderly process.” Drinking water, towels and portable toilets have been provided, the statement added, while migrants wait to be transported to facilities. 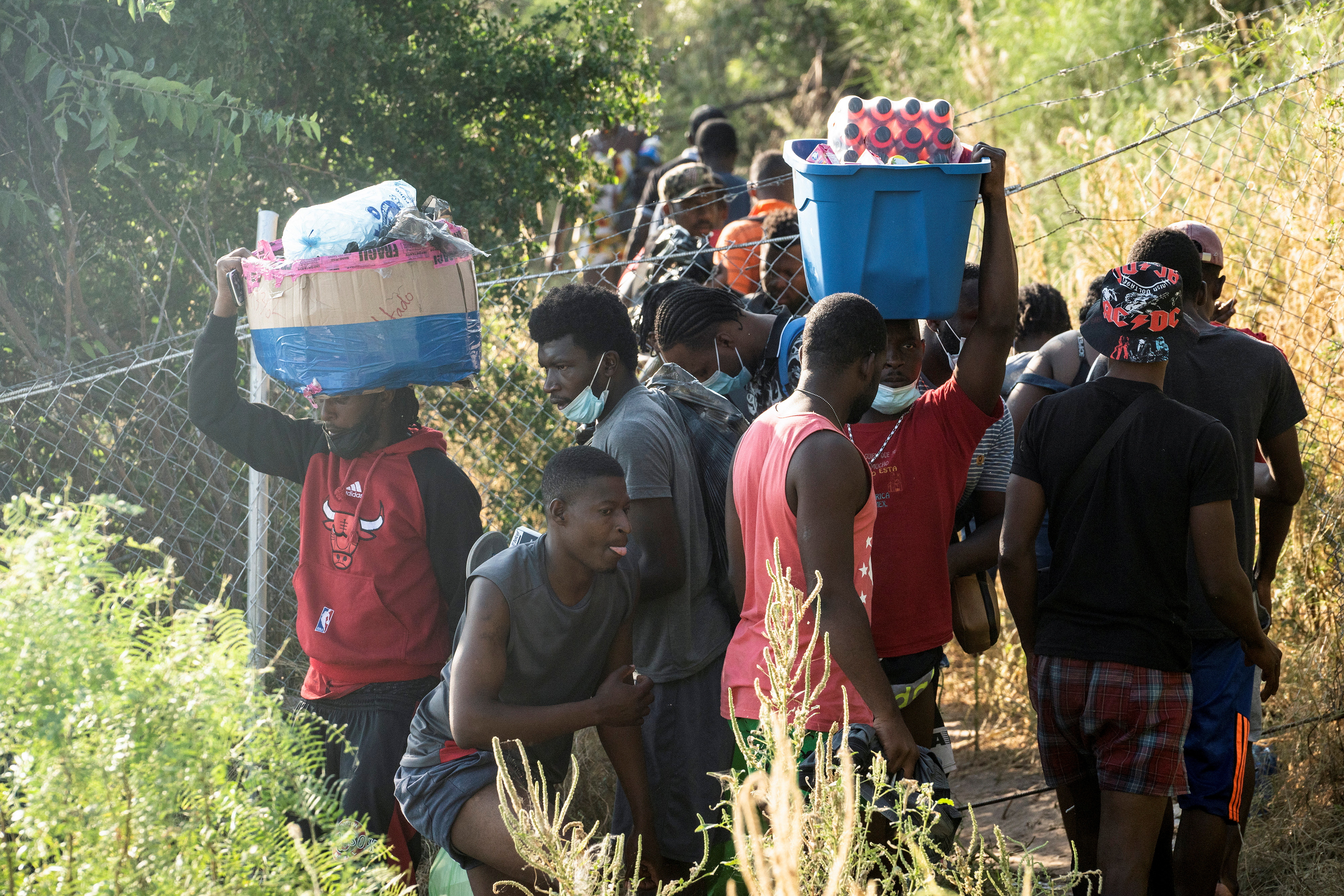 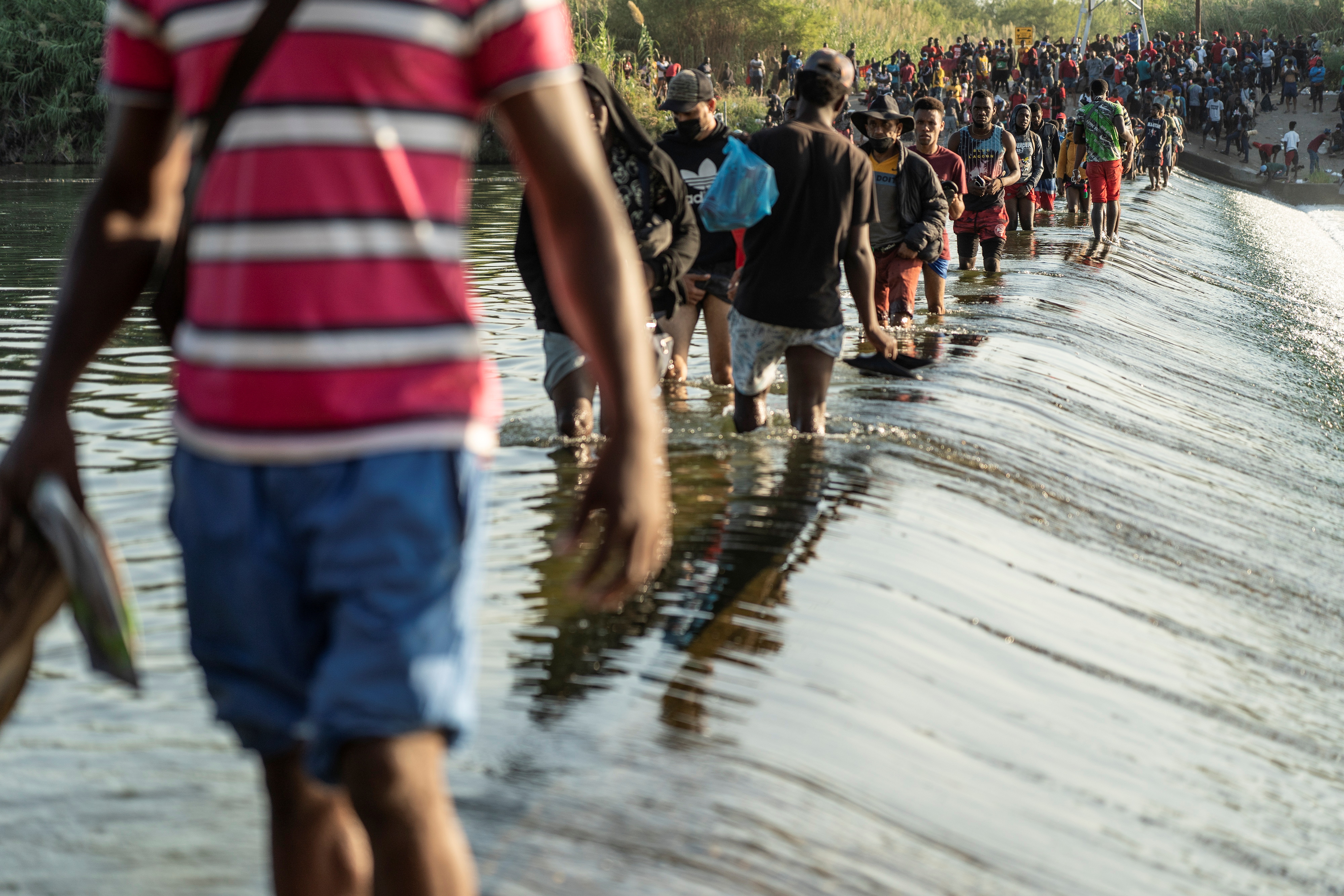 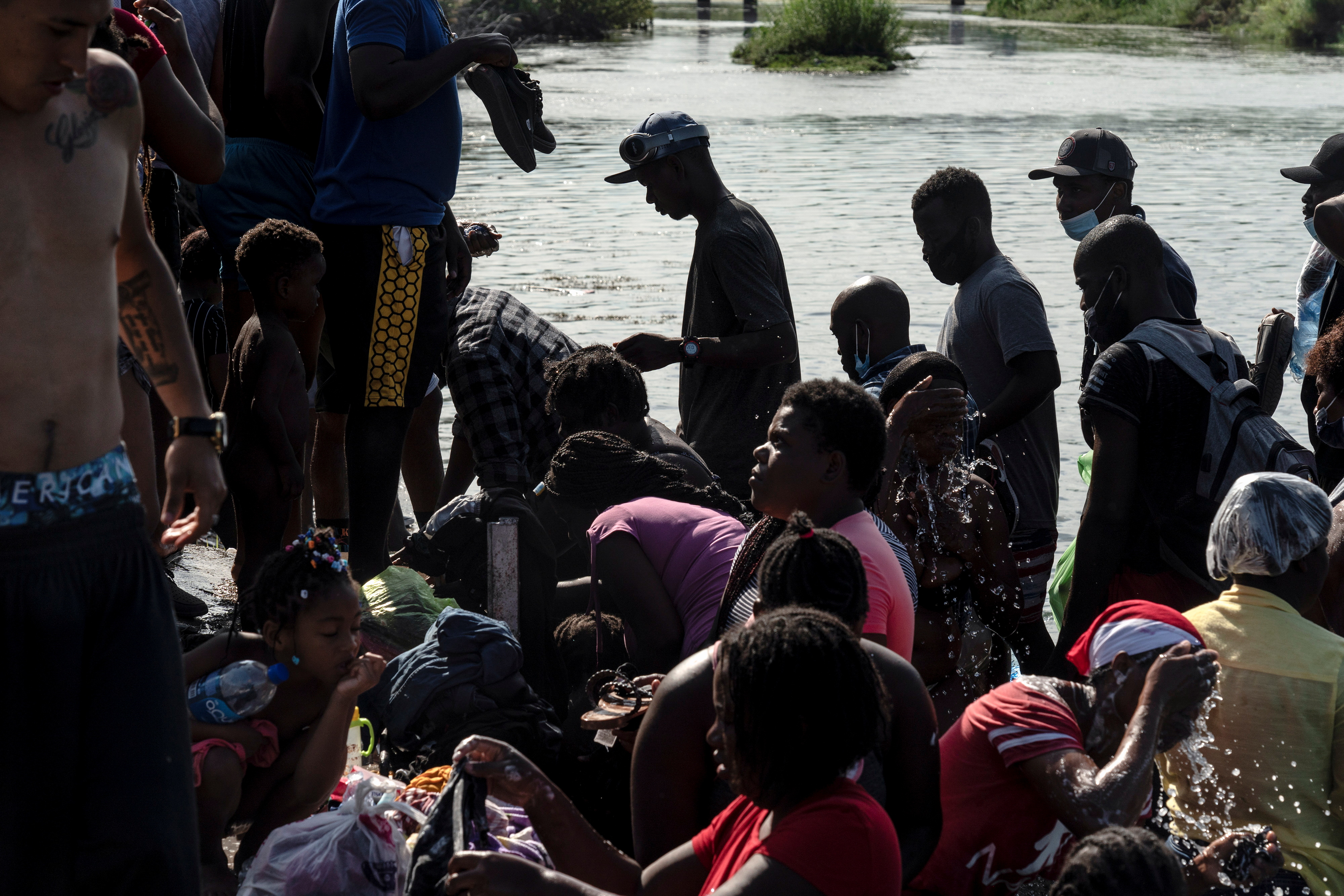 Migrants seeking asylum in the U.S. walk in the Rio Grande river near the International Bridge between Mexico and the U.S., as they wait to be processed, in Ciudad Acuna, Mexico, September 16, 2021. According to officials, some migrants cross back and forth into Mexico to buy food and supplies. REUTERS/Go Nakamura

Biden, a Democrat who took office in January, has rolled back many of the hardline immigration measures of his Republican predecessor, former President Donald Trump.

But he has been caught between pro-migrant groups and some Democrats who have criticized him for not doing more to help migrants, and opponents who say his policies have encouraged illegal immigration.

Del Rio is in Val Verde County, which voted for Trump in 2020. Some residents in this sprawling, bilingual border town say they feel abandoned by the federal government on border security.

“Are they doing anything to stop them from coming?” one woman said while she looked down at the encampment while driving over the bridge.

‘WHEN ARE WE LEAVING?’

Carlos, a 27-year-old Venezuelan who said he left his home after graduating university in July, said he thought the camp had doubled in size since he arrived on Tuesday. Carlos, who declined to give his full name, said he had only $10 left, and that there were 400 families ahead of him in the queue for processing.

Both migrants and Mexican officials said many more people are expected in coming days. Some told Reuters they had chosen to cross here because the river is shallow and they felt there was comparatively less cartel activity.

Jeff Jeune, a 27-year-old Haitian who was reselling water bottles for a 3 peso (15 cent) profit, said he and his young family were exhausted, hungry and sleeping on the ground. He fretted about his kids falling ill in the makeshift camp.

“My ten-year-old asks: ‘When are we leaving?’ He’s always asking that.”