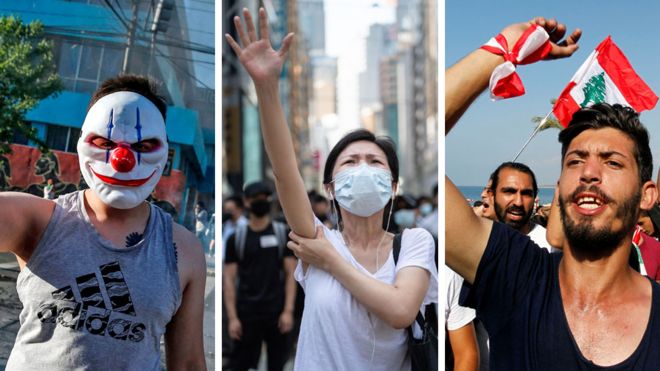 In recent weeks, mass protests have broken out in countries from Lebanon to Spain to Chile. All are different – with distinct causes, methods and goals – but there are some common themes that connect them.

While thousands of miles apart, protests have begun for similar reasons in several countries, and some have taken inspiration from each other on how to organise and advance their goals.

Here’s a look at the issues at stake – and what binds many of those taking to the streets.

Many of those protesting are people who have long felt shut out of the wealth of their country. In several cases, a rise in prices for key services has proved the final straw.

Demonstrations began in Ecuador this month when the government announced that it was scrapping decades-old fuel subsidies as part of public spending cuts agreed with the International Monetary Fund (IMF). The change led to a sharp rise in petrol prices, which many said they could not afford. Indigenous groups feared that the measure would result in increased costs for public transport and food, and that their rural communities would be hardest hit.

Protesters blocked highways, stormed parliament and clashed with security forces as they demanded an end to austerity and the return of fuel subsidies. The government backed down after days of mass protests and the action came to an end.

A hike in transport prices has also sparked protests in Chile. The government blamed higher energy costs and a weaker currency for its decision to increase bus and metro fares, but protesters said it was just the latest measure to squeeze the poor.

As demonstrators clashed with security forces on Friday evening, President Sebastián Piñera was pictured dining in an upmarket Italian restaurant – a sign, some said, of the chasm between Chile’s political elite and the people on the streets.

Chile is one of Latin America’s wealthiest countries but also one of its most unequal – it has the worst levels of income equality among the 36 member nations of the Organisation for Economic Co-operation and Development (OECD). 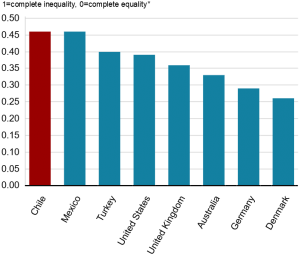 Like in Ecuador, the government backtracked and suspended its fare hike in an effort to quell the protests. But the protests continued, growing to take in wider grievances.

“This is not a simple protest over the rise of metro fares, this is an outpouring for years of oppression that have hit mainly the poorest,” one student taking part in the action told Reuters news agency.

With debt levels soaring, the government has been trying to implement economic reforms to secure a major aid package from international donors. But many ordinary people say they are suffering under the country’s economic policies and that government mismanagement is to blame for their troubles.

Claims of government corruption are at the heart of several of the protests, and are closely linked to the issue of inequality.

In Lebanon, protesters argue that while they are suffering under an economic crisis, the country’s leaders have been using their positions of power to enrich themselves, through kickbacks and favourable deals. 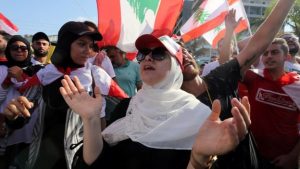 “I’ve seen a lot of things here but I have never seen such a corrupt government in Lebanon,” said 50-year-old protester Rabab.

The government on Monday approved a package of reforms, including slashing politicians’ salaries, in an effort to quell the unrest.

People in Iraq have also been calling for the end of a political system that they say has failed them. One of the main points of contention there is the way government appointments are made on the basis of sectarian or ethnic quotas, instead of on merit.

Demonstrators argue that this has allowed leaders to abuse public funds to reward themselves and their followers, with very little benefit to most citizens.

Protests against alleged government corruption have also taken place in Egypt. The rare demonstrations in September were prompted by a call from Mohamed Ali, an Egyptian businessman living in self-imposed exile in Spain, who accused President Abdel Fattah al-Sisi and the military of corruption.

His allegations that Mr Sisi and his government have been mishandling funds resonated with many Egyptians who have grown increasingly disaffected by austerity measures.

In some countries, protesters are angered by political systems in which they feel trapped.

Demonstrations in Hong Kong began this summer over a bill that would have allowed criminal suspects to be extradited to mainland China in certain circumstances. Hong Kong is part of China but its people enjoy special freedoms and there is a deep sense of fear that Beijing wants to exert greater control.

Like fellow protesters in Chile and Lebanon, the mass action in Hong Kong led to the withdrawal of the controversial legislation, but the protests themselves continued. Among their demands, protesters now want complete universal suffrage, an independent inquiry into alleged police brutality and amnesty for demonstrators who have been arrested.

Their tactics have inspired political activists halfway across the world. Hundreds of thousands of people have rallied in Barcelona to express anger over the jailing of Catalan separatist leaders. The separatists were convicted on 14 October of sedition over their role in a 2017 referendum outlawed by the Spanish courts and a subsequent declaration of independence.

Shortly after the sentence was given, people in Barcelona received a message on a popular encrypted messaging service telling them to go to Barcelona’s El Prat airport, mimicking a tactic used by Hong Kong protesters.

As they made their way to the airport, a group of youths shouted: “We’re going to do a Hong Kong”, according to local media reports.

Catalan protesters have also been distributing infographics made in Hong Kong that detail how demonstrators can protect themselves from police water cannon and tear gas. “Now people must be in the streets, all revolts start there, look at Hong Kong,” one protester in Barcelona told AFP news agency.

Of course, many of the protests that you hear about will have been linked to the environment and climate change. Activists from the Extinction Rebellion movement have been protesting in cities around the world, as they demand urgent action from governments.

The protests have taken place in countries including the US, UK, Germany, Spain, Austria, France and New Zealand. Participants have glued and chained themselves to roads and vehicles, and tried to disrupt busy city centres.

“We have no choice but to rebel until our government declares a climate and ecological emergency and takes the action that is required to save us,” said Australian activist Jane Morton.

“We are skipping our lessons to teach you one,” one sign read.