Basseterre, St. Kitts – The Team Unity administration’s commitment to substantially increasing affordable housing capacity as well as job opportunities in St. Kitts and Nevis has Prime Minister the Honourable Dr. Timothy Harris saying his cabinet is considering approaches to ensure that contractors, developers and the government have “an even closer and more profitable partnership.”

“What Minister [Eugene] Hamilton [minister of human settlement, land and cooperatives et al.] has proposed for our consideration is that where a developer wants to invest in the construction of homes for the people of St. Kitts and Nevis, the government should give them a special concessional price on the lands,” Harris said Nov. 7. “That would help to make it cheaper, of course, for the end user. He has recommended that we consider duty-free concessions in support of such projects and we, of course, have given good thought to that. We recognize that, through this particular route, a number of our sons and daughters could become developers and contractors and earn a quality standard of living. So, our administration will identify a number of lands and areas for such development, and in our [2018] budget…it will be the pleasure of the minister of human settlement to identify the first 10 sites, which the government will make available for private parties to become involved. So, if you have a good idea, you could go to the bank now and start making an investment.”

Prime Minister Harris made this announcement while speaking at Cunningham Heights in Spooners, Cayon, during Tuesday’s official ribbon-cutting and handing over of keys to 14 homeowner families whose houses have been completed under Phase 1 of the Unity Housing Solutions Program. Three hundred affordable homes are being built throughout St. Kitts under the program, which is a government initiative being implemented in collaboration with the National Housing Corporation (NHC). It is also enabling the construction of homes for people who own land and need assistance to build.

At Tuesday’s key presentation ceremony, Harris noted that “this housing program is not just a matter of property ownership, critical as that is to our Prosperity Agenda; it is also about putting St. Kitts and Nevis to work.”

Harris reported that the National Housing Corporation has contracted 87 contractors, 28 heavy equipment operators, 48 painters, 44 joiners, and 527 workers have benefited so far under the Unity Housing Solutions Program.  “We are spreading around the work,” he said. “Everyone then is being considered important.” 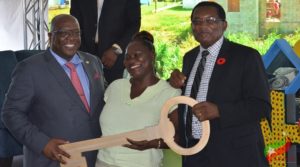