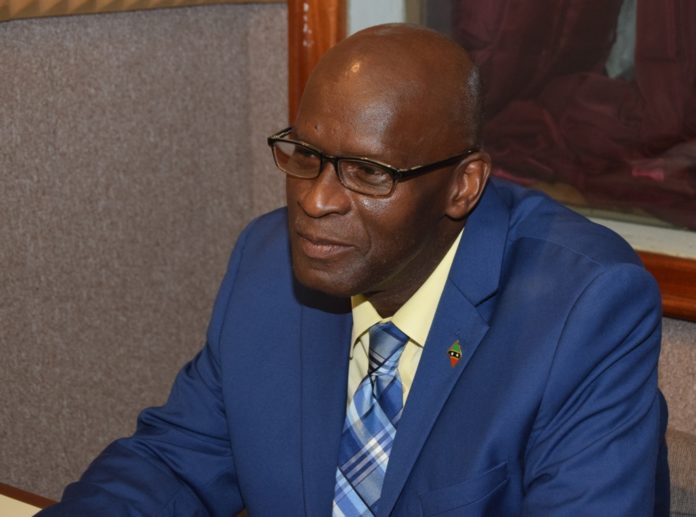 Basseterre, St. Kitts – With just 84 days to go before the federation celebrates 34 years of independence, William V. Hodge, permanent secretary in the ministry of education and chairman of the education sub-committee for independence, officially launched a theme competition as a way to get citizens and residents alike to utilize their creative skills.

The deadline for submission of entries is Friday, July 14, with late submissions not acknowledged. All entries must be submitted in writing and sent via email, postal mail or dropped in a drop box at the entrance of government headquarters on Church Street in Basseterre.

The chairman shared the guidelines for the theme competition so as to give participants a better understanding.

“The theme must be short, fully expressive and memorable and certainly no longer than a sentence,” he said. “Composers should be able to craft the theme within six to eight words.  The theme should encompass the general development thrust of the country [and] must consist of an internal rhyme scheme and rhythm that will enhance the slogan,” said the chairman, while adding that like years gone by, this year, the committee is reaching out once again to citizens and residents to tap their creative juices to develop a slogan that reflects the celebratory and patriotic mood of independence. The theme should accurately reflect the country’s realities and the shared common future to which all citizens should reasonably aspire.”

Hodge said that his ministry will be playing an integral role in Independence 34, as the cabinet decided that this year’s celebration will focus on the federation’s youth.

“The ministry of education is responsible for our children and young people of school age, and has been charged with planning a number of events that will engage our young people,” Hodge said, encouraging young people to participate in the completion. “We hope to have a very keen completion and look forward to the nation’s youth, in particular, taking a very engaged part.”

A maximum of two submissions are allowed per person, and every submission “must be new and original, as old or plagiarized entries will result in immediate disqualification,” he added.

Entries can be emailed to william.hodge@moeskn.org or independence.themeskn@gmail.com. If participants are using the postal service, entries must be addressed to the Permanent Secretary, Ministry of Education, Church Street, Basseterre.