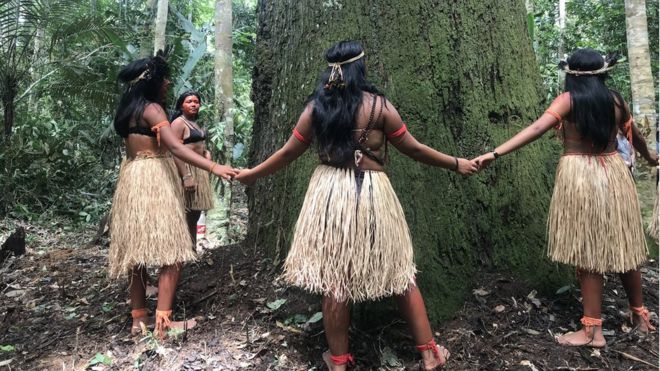 Deforestation in the Amazon rainforest is advancing at worrying levels. In January, the area lost was double that in the same month in 2019, according to official figures.

This after a catastrophic dry season last year in which fires destroyed large swathes of the rainforest, a carbon store which is seen as key in slowing down the pace of global warming.

There was outrage around the world as fire destroyed trees and killed wildlife at a rate not seen in years.

Six months on, Nomia Iqbal went to the Brazilian Amazon for a new BBC programme, My World, to ask young people how they see the future of this crucial region.

‘We will fight to the death

Maristela Clediane Uapa Arara is 14 years old and a member of the Arara-Karo indigenous group. The hunter-gatherers are one of about 900,000 groups which have lived in the rainforest for thousands of years.

But now their specially protected territories are under threat from loggers and miners. “We are worried because the forest is very important to us,” Maristela says.

“The forest is our mother, she takes care of us, so we must take care of her because that’s where everything comes from.”

He has promised to “integrate” them into the rest of the population and open some of their lands to agriculture and mining.

It is a policy which worries Maristela: “This new government hates indigenous people but I am really proud to be indigenous, and as women it is our role to fight for our land.”

Maristela’s cousin, 22-year-old Juliana Tuiti Arara, says it is not just the president and his plans that concerns them but also attacks on the forest by fellow indigenous people.

“It was very sad for us, people from outside are co-opting our indigenous people to log the forest,” she explains as she fights back tears. “In the last years, we saw our relatives killing the trees, they came in with bulldozers.”

Both girls say it has strengthened their determination to protect the land which their ancestors fought for. “‘Act’ for me is a very strong word. We must act, we cannot stop and stand with our arms crossed.”

How far will they go to fight for their lands? Without missing a beat, Maristela and Juliana both say “até à morte” (to the death).

‘We all have the same rights to use the land’

It is not just the indigenous people that believe the land is theirs. In a different region, 16-year-old Carina de Faria and her brother Rodrigo, 18, are the next generation of farmers.

They are spending the day herding cattle with their father Gerson leading the way. They want to follow in his footsteps.

“Everyone, absolutely everyone, needs the land,” says Carina. “Many farmers need the land to produce for themselves and for others, globally or locally. So I think everyone has that right and it should just be divided equally.”

They have 100 hectares (1 sq km) of farmland, which used to be rainforest, where they grow much of their own vegetables and rear cattle.

But they are also worried about the effects of deforestation. “I think that enough has been destroyed and what remains, should be left alone,” says Rodrigo.

“Many of the people who are deforesting the woods are much older, but us young people realise that climate change is already happening,” Carina adds.

“Young people are very connected through technology so we should work together. And also it is government’s duty to find a solution for everyone.”

‘Many farmers are close-minded

A few minutes’ car drive away lives 18-year-old Gustavo, who is good friends with Rodrigo. Last August his family farm was hit by a fire.

Fires are common during the dry season and often caused by naturally occurring events, but this time it was different. “We are very sad with this situation because someone illegally set fire to the land to clear it for himself,” he says.

“We had 70% of the property burned and we had to treat our cattle, we lost animals too…. we lost a lot.”

Even though Gustavo is from a farming family himself, he says it is other farmers who are putting the Amazon’s future at risk.

“The rainforest won’t survive – many farmers are closed-minded about environmental issues. They just want to clear the land for more profit.”

‘What do we want? Climate justice! When do we want it? Now!’

These are the chants that can be heard on the busy streets of Manaus, the capital of Brazil’s Amazonas state. In this city of two million people, right in the middle of the rainforest, 15-year-old Bruno Rodrigues and his classmates have started a group called Conscious Next.

They stop strangers to highlight the dangers of climate change. “We tell them why it is so urgent,” Bruno explains, adding that not all of those they stop approve. “There will be some people that will never want to listen to what young activists are saying,” he says.

They are part of a movement of young people which gets together every Friday to protest, under the “Fridays For Future” banner launched by teenaged climate activist Greta Thunberg.

Fifteen-year-old Ana Beatriz says her family was affected by the Amazon fires. Her sister has breathing problems and had to be taken to hospital because of the smog caused by the fires.

“I was also very sad because of the trees and the animals burned there, it was shocking to me,” she recalls. The Amazon is home to one in 10 species on earth and experts say the fires killed more than two million creatures, including jaguars, snakes, sloths and insects.

Despite the devastation caused by the fires, Bruno remains optimistic. “There is still hope in us – we live in action. The politicians need to take practical action and with thousands of us young people on the streets, it will be impossible for them to ignore us.”