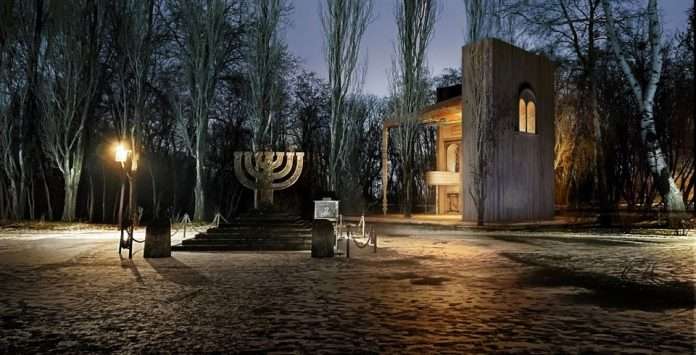 Today marks Holocaust Memorial Day. But for many of the people and nations commemorating it this year, it will be an Internet event. In Ukraine, 2021 has a special significance.

A foundation established to commemorate one of the most horrific massacres of the Second World War at Babyn Yar in Ukraine has unveiled its construction plans for one of the world’s largest Holocaust memorial centres, which is to include a synagogue, church and mosque, a research centre and two museums to commemorate both the atrocities at the site and the wider genocide against Eastern European Jews.

In an announcement to coincide with International Holocaust Remembrance Day, the Babyn Yar Holocaust Memorial Center said it plans a dozen buildings at the site on the outskirts of Kiev to remember the 100,000 victims shot there by the Nazis, including Jews, Ukrainians, Roma and the mentally ill.

The new plan for a complex replaces an initial concept for one large museum at Babyn Yar, says Robert Jan Van Pelt, a professor at the University of Waterloo in Canada, who chaired the group behind the master plan for the museum at Auschwitz and is now a member of the architectural board for Babyn Yar.

The site on the outskirts of Kiev will commemorate the 100,000 victims shot there by the Nazis © Manuel Herz Architekten.

The initial concept entailed a museum on the scale of the Museum of the History of the Polish Jews in Warsaw in an imposing building designed by a star architect, Van Pelt says.

“For many reasons it appeared that in the end, it was the wrong program, and what the foundation has been doing in the past year is to rethink again from scratch,” he says. “This will be a number of smaller projects, that that will go over time—there will be a 10-, 15-, 20-year kind of horizon not necessarily to make a really big statement. This also allows us to work more experimentally.”

“One of the principles the architectural board has established now is that we’re not going to really penetrate the site, we do not want to excavate, we do not want to create a big building that sits heavily on it.” He says a synagogue that is scheduled to open later this year, designed by Manuel Herz, “touches very lightly” on the site of what the foundation describes as Europe’s largest mass grave.

Herz says he has obtained a construction permit for the synagogue and plans to start building soon, with completion due by late spring or early summer. The design resembles a flat vertical book that unfolds into a space of about 80 sq. m. Its inspiration, Herz says, is a pop-up book that reveals “a whole new world, a cabinet of wonder.”

This year marks the 80th anniversary of the murder of 33,771 Jews in just two days at Babyn Yar in September 1941, one of the earliest massacres of the Holocaust. But for Van Pelt, it is also important to commemorate Jewish life in Ukraine, given that the region was, he says, “the heartland of European Jewry for many, many centuries.” The site will also address the denial of Jewish history since 1945, he says.

It is the day we remember the millions of people who died during the Holocaust, under Nazi persecution, and in the genocides that followed in Cambodia, Rwanda, Bosnia and Darfur.

Held every year, it falls on the anniversary of the liberation of the Auschwitz-Birkenau concentration camp, where more than a million people died during the Second World War.

The theme for this year is ‘Be the Light in the Darkness’.

It encourages us all to reflect on the depths humanity can sink to, but also the ways individuals and communities resisted that darkness to ‘be the light’ before, during and after genocide.