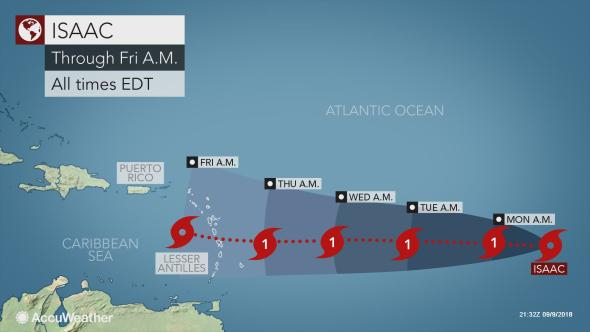 “I’d say that is quite a fast pace,” Hallstrom said. “So far the NHC has been very accurate with its projections, so let’s see how this follows.”

Hallstrom advised everyone to stay alert to any changes.

The anticipated track of Isaac will put the Lesser Antilles in line for possible impacts this week.

“There is a growing consensus that this system could threaten the Lesser Antilles during the middle or later part of the week,” AccuWeather hurricane expert Dan Kottlowski said.

Environmental conditions across the Atlantic will be favourable for strengthening as Isaac tracks toward the islands.

“There is a significant chance this storm may become a hurricane along the way,” AccuWeather Senior Meteorologist Alex Sosnowski added.

Regardless of strength, seas will become rough and dangerous for bathers and boaters along the east-facing portions of the islands as early as Wednesday.

Rain and wind should also increase during the second half of the week on the projected path of the tropical storm.

The current track of Isaac will take it south of the areas that bore the brunt of Irma and Maria’s wrath last year.

“All interests in the Lesser Antilles should monitor the progress of this system closely,” AccuWeather Senior Meteorologist Mike Doll said.

Now is the time for people on the islands to review of formulate a plan of action.

Cruise ships may have to alter their itinerary due to the storm.