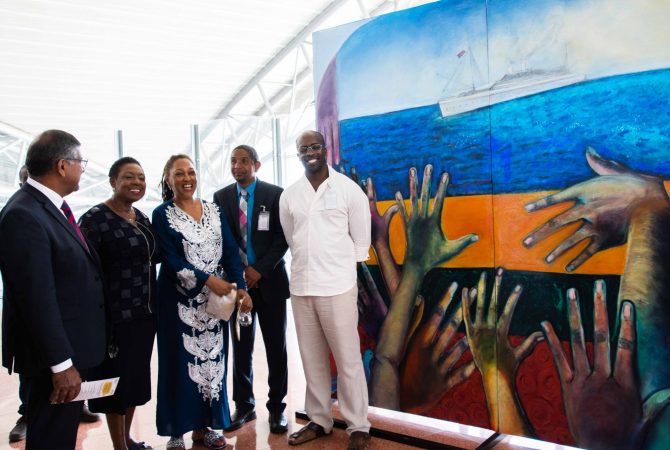 KINGSTON, Jamaica, CMC – The Jamaica government has unveiled a mural exhibition at a local airport in tribute to the Windrush Generation.

“From the climatic shock of cold, rainy England to the prejudices and discomforts of settling in a new and often unwelcoming environment to the reality of being alone in a strange land of reluctant neighbors, our people experienced every challenge in the book of ignorance and racism,’ “said Culture, Gender, Entertainment and Sport Minister, Olivia Grange, at the ceremony last Friday.

The exhibition is mounted at various locations in the arrival and departure sections at the Norman Manley International Airport and among those attending the ceremony was the British High Commissioner to Jamaica, Asif Ahmad.

Grange said the exhibition was a tribute to the “resilience and indomitable spirit” of a generation of Jamaicans who responded to the invitation of post-Second World War Britain for laborers to help restore services and communities.

She said despite the cold, the Jamaicans were undaunted.

“Their fearless, feisty Jamaican heritage was enough buffer against the many challenges they confronted… Armed with their Jamaican culture, heritage, and traditions, they determined to make the best for themselves and their families… Through their indomitable spirit and resilience, they developed what has become the formidable Jamaican Diaspora of the United Kingdom.”

The Windrush Mural project is a collaboration between the Jamaica government and the British Council. It features pieces by Jamaican and British artists: Honey Williams, Rosemarie Chung, Sheldon Blake, Tiana Anglin, Kirk Cockburn and Jamila Cooper.

Ahmad said that “when the murals were commissioned as a joint endeavor between British and Jamaican artists, the idea was to capture the complex associations and attributes of Windrush. Hopes and dreams of travelers, immigrations rules which impacted the lives of families, the challenges migrants face finding work and vibrant community dynamics are just some thoughts that now find expression in the Windrush Murals.”

Grange said it was a deliberate move to exhibit the Windrush Murals first at the Norman Manley International Airport as it “signifies the changing form of transport, from sea to air, for migrants,” as well as promotes the airport as an artistic and cultural space.

The Windrush Mural exhibition will be mounted at the airport for three months. Then it will move to Orange Park in Downtown, Kingston and become the entrance to the National Gallery of Jamaica for six months. Following that, the exhibition will travel across Jamaica.

About 500 migrants from the Caribbean arrived at Tilbury Docks in Essex on 22 June 1948 aboard the MV Empire Windrush, at the invitation of the British government, to help rebuild the UK in the aftermath of the second world war.

“The Windrush generation helped lay the foundations for the country we know today, which is richer and stronger as a result of their hard work and dedication to the UK,” said former British prime minister Theresa May, who earlier this year announced plans to erect a monument in honor of the Windrush Generation.

“This monument will be a lasting legacy to the tremendous contribution the Windrush Generation and their children have made to our great country.”

But her announcement came after a prominent Windrush person, former Middlesex cricketer Richard Stewart, died without receiving compensation or a personal apology from the government.