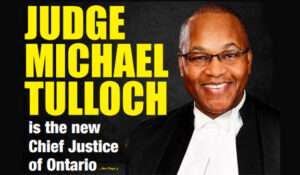 He replaces George R. Strathy, who retired on August 31.

“The Honorable Michael H. Tulloch is a highly respected member of Ontario and Canada’s legal community. As he takes on his new role as chief justice of Ontario and president of the Court of Appeal for Ontario, I wish him continued success. I know he brings a wealth of experience to the position and will continue to serve Ontarians well,” Trudeau said.

Tulloch was appointed by the governor general on the advice of Cabinet and the recommendation of the prime minister.

As chief justice, he is responsible for the leadership and administration of the courts and also serves as a member of the Canadian Judicial Council which works to improve the quality of judicial services in the superior courts of Canada.

Tulloch was appointed a judge of the Superior Court of Justice for Ontario in 2003. He was elevated to the Court of Appeal for Ontario in 2012, becoming the first Black Canadian to sit on any appellate court in Canada.

Prior to his appointment to the bench, he had served as an assistant crown attorney in Peel and Toronto from 1991 to 1995 before entering private practice, where he specialized in criminal law.

He also served on the Government Response Team for the Commission on Systemic Racism while working as a Crown Attorney. He was chair of a review panel on Osgoode Hall Law School’s admissions policy in 2006.

He attended Central Peel Secondary School in Brampton, Ontario, York University in Toronto, and Osgoode Hall Law School. After graduating from law school in 1989, he became an assistant crown attorney in 1991, and later worked as a private defence lawyer. In 2003, he was appointed as a judge to the Ontario Superior Court of Justice. He was appointed to the Court of Appeal effective June 30, 2012.

Michael H. Tulloch is a former president of the Canadian Association of Black Lawyers. He was born in Jamaica and came to Canada when he was nine years old.