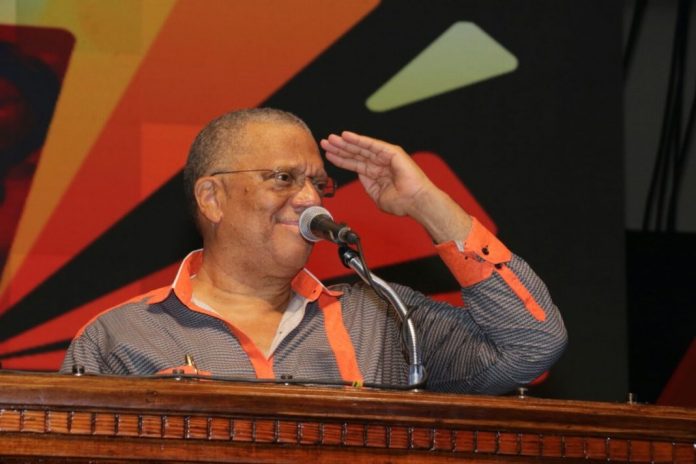 KINGSTON, Jamaica – To protest the alleged high level of corruption within the Jamaican government, the opposing party, People’s National Party (PNP) has staged an anti-corruption vigil in Kingston today.

In recent months, a myriad of corruption scandals have rocked the Andrew Holness-led administration in Jamaica, including the major Petrojam scandal, National Energy Solutions Limited’s contract controversy, and misuse of funds at the Caribbean Maritime University (CMU) which led to former Education Minister, Ruel Ried being fired from his post.

Crowds of PNP supporters and politicians gathered at Mandela Park in Half-Way Tree, Kingston to pressure the government into addressing the multiple scandals that have come to light over the last year.

Supporters attempted to move the protest to the entrance of Jamaica House, but police increased their presence at the building, foiling the PNP’s attempt.

In a news release from PNP General-Secretary, Julian Robinson, the protest, being described as a ‘vigil’, comes “in light of the ongoing spread of allegations of corruption across several ministries and public bodies, and the lack of appropriate action by the Andrew Holness administration to hold its members accountable.”

With regard to the many scandals, Robinson said that “The PNP, through its parliamentary groups and committees, has exposed… corruption in various ministries and agencies, including the Ministry of Science, Energy and Technology, the Ministry of Education, the Ministry of National Security and the Caribbean Maritime University, Petrojam, USF, NESoL, the UDC and through projects such as the $800 million de-bushing programme, and the $230 million purchase of used cars for the police that are yet to be delivered in full.”

The PNP said the vigil is the first in a series of events across the island to bring awareness to the “brazen plundering of the public purse by members of the political executive and their operatives, who are yet to be brought to book”.

The latest scandal to have rocked the government involve allegations of nepotism and cronyism at the Ministry of Education and the misuse of funds at CMU, for which Senator Ried was responsible. Reid is currently under a criminal investigation by the police as well as the Financial Investigation Division. The Auditor General’s Department is also conducting a probe at the Education Ministry.