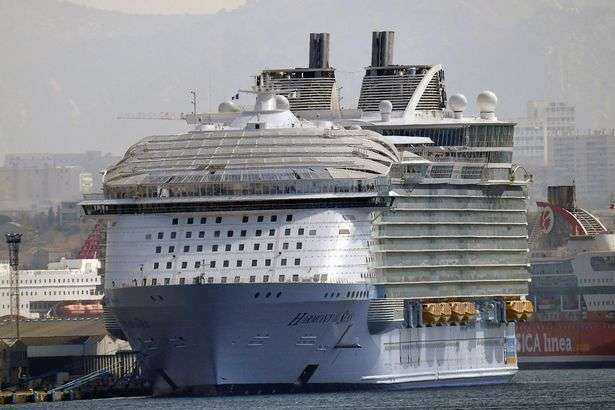 Passengers were heard screaming “oh my god” and “holy sh**” as the world’s longest cruise ship in Falmouth, Jamaica, drifted towards the port and crashed into a pier


Royal Caribbean’s The Harmony of the Seas 1,188-foot cruise ship crashed into a pier in Jamaica.

At the country’s busy port on the northern shore, Falmouth, the cruise liner attempted to dock around 7am on Thursday but proceeded to smash into the dock.

As the ship started drifting towards the port, passengers could be heard screaming in a video which has garnered more than half a million views on social media.

“Oh my God”, one woman could be heard crying out in a video, while another passenger was heard yelling “Holy sh**”.

Royal Caribbean said in a statement that despite the terrifying accident, there were no injuries but the ship did sustain some “cosmetic damage”

Despite the accident, the cruise was able to continue its journey without any issues and passengers could continue to enjoy their tour and planned activities.

The world’s biggest cruise liner the Harmony of the Seas (

Falmouth’s Minister Edmund Bartlett said: “We are repairing the damaged areas at the port now.

“The divers are there now recovering the broken elements and we should be back in full order for the ships that come next week.”