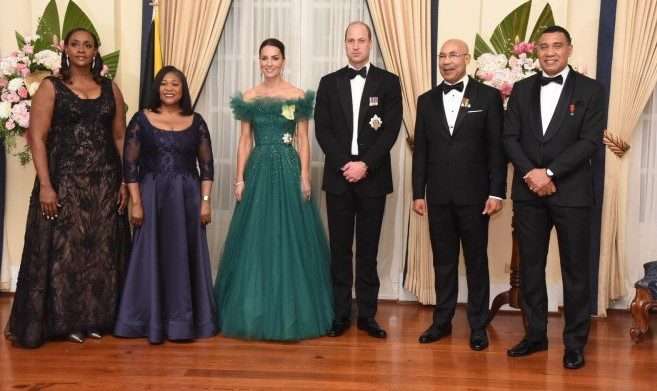 The Jamaican government spent a total of $8 million to host the Duke and Duchess of Cambridge, William and Kate Middleton, who came to the island on an official three-day visit in March.

The information was released by the Office of the Prime Minister (OPM) following an Access to Information request.

According to the budget, the Government spent $4,198,129 for the King’s House State Dinner which was hosted by Governor-General Sir Patrick Allen.

A further $804,576 was allocated for portalet, cleaning services, decor and rental, among other things; $422,615 for transportation, which included fuel and vehicle rental charges; and $302,965 was allocated to printing programs, labels, stickers and promotional electronic banners.

At the same time, $122, 829 was used for media and support accreditations.

The Government also paid $50,000 for the culture performers at Trench Town Culture Yard and $31,687 was allocated as “contingency.” The remaining $2 million was reportedly spent on welfare and hospitality, bringing the total to $8,004,698.35.

The OPM stated that the gifts for the royal couple were provided at no cost to the government.

Ahead of the Royal Visit, Minister without portfolio in the OPM, Robert Nesta Morgan, had stated that the government would not be paying for the royal visit.

“The Government doesn’t pay for royal visit… There are obviously going to be costs if a VIP is coming to the country. There will obviously be costs as it relates to personal security… It happened with President [Barack] Obama, it happens with any dignitary that comes to Jamaica, the country foots a cost,” he said at a press conference in late February.

But amid backlash over the budget, Morgan took to social media to clarify his previous statements.

“I did say there will be costs including security etc… We didn’t pay for their jet and other costs.” Morgan tweeted.

The royal visit of William and Kate to the Caribbean formed part of celebrations marking the 70th Anniversary of the Coronation of Her Majesty The Queen.

The couple arrived in Jamaica on March 22 and departed on March 24. During their visit, Prime Minister Andrew Holness made it clear that the island plans to cut ties with the British monarchy and move towards becoming a republic.

“Jamaica is, as you would see, a country that is very proud of our history and very proud of what we have achieved. And we are moving on and we intend to attain, in short order, our development goals and fulfill our true ambitions and destiny as an independent, developed, prosperous country,” he said.

William and Kate also made stops in Belize and The Bahamas in March.