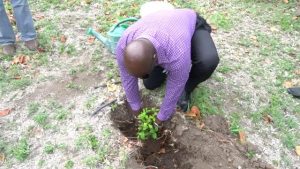 Alexis Jeffers, Deputy Premier of Nevis and Minister of Agriculture, plants the first fruit tree at the government-owned farm in Cades Bay on May 07, 2019, the first of 500 to be planted on the island as part of Agriculture Awareness Month 2019.

There has been a steady flow of persons taking part in the Department of Agriculture’s initiative to plant 500 fruit trees on government-owned farms and private lands throughout the island.

Alexis Jeffers, Deputy Premier of Nevis and Minister of Agriculture, launched the tree-planting project on Tuesday, May 07, 2019, when he planted the first tree at Cades Bay, as part of the Ministry and Department of Agriculture’s 7th annual Agriculture Awareness Month with the theme “Think Climate Smart, for Food and Nutrition Security and Sustainability.” He described the project as a significant undertaking.

“I believe this is a significant event and at this point in time…What we are doing here this morning is a way of combatting some of the negative effects of climate change, and also at the same time ensuring that we are feeding ourselves and providing the right nutrition and the right amount of food so that we can sustain ourselves into the future…,”he said.

“Trees can provide shelter for human beings, animals…Trees are very important to our existence that’s why we have to make it our business to ensure we are planting trees throughout the island of Nevis,” he said.

Jeffers encouraged the public to join in the venture as they strive for a sustained and healthy future for Nevis and its people.

Randy Elliott, Director at the Department of Agriculture, stated that the department is prepared to hand out 250 fruit trees free of cost at the Prospect Experimental Station, however, it is on a first come first serve basis.

He explained they would be tracking the progress of the trees and all persons would be required to give are their names and the addresses at which the trees would be planted.

Elliott said the department was moved to embark on the fruit tree planting initiative because of the continual increase in imported fruits to Nevis, some of which can be produced locally. He described the local fruit as being very health and more nutritious than those that are imported.