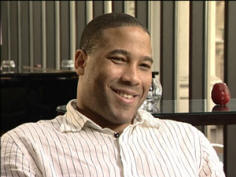 England and Liverpool Football star John Barnes had kind words for the St. Kitts-Nevis Football Association and the youths who took part in the two-day clinic under his tutelage.

“I’ve been very impressed with St. Kitts because they have been organised,” Barnes said. He added that football seems to be the sport that defines the country:  “St. Kitts seems to be a football country with respect to infrastructure and development programmes for the youths.”

He also commended the SKNFA for its role in the Kick Start Clinic.  “The Football Association is very interested.  Everyone met us at the airport because this is a football country,” Mr. Barnes said.

In addition, Mr. Barnes praised the young players who he coached for two days.  “You look at the boys. They are very organised, they are on time, they’ve got discipline,” he said.

The National U-20 team, which John Barnes coached for two days, defeated the Digicel Village Superstars.  After a disallowed goal, Kevin Benjamin still managed to score the first goal for the U-20.

“It was definitely a goal, the ball came out of the net through the hole and the referee said it was wide.  I was disappointed but I remembered what Mr. Barnes said about reacting to disappointment and it drove me to score the next goal,” said Benjamin.  The final result was 2-0 in favour of the U-20.

The discipline, dedication, desire, humility and teamwork that the U-20 demonstrated in their win are some of the qualities Mr. Barnes will appraise and select six individual from the region to participate in training at Sunderland Football Academy in the United Kingdom.

“We in the Caribbean concentrate so much on the talent rather than the other things.  We will never lose the talent but what we can add to our make up and character to make us successful are the togetherness, the spirit and desire,” stated Mr. Barnes.

He furthered that point with reference to success in African countries.

“If we can harness those qualities then we would go like the African countries have evolved and gone forward.  That’s how we would then progress,” Mr. Barnes added.

But Mr. Barnes made mention of the challenge of racism in European football, the place that has many opportunities for young players.  He said that the football pitch has achieved some measure of equality among the races, but racism still exists in football at the managerial level.

“Until we are considered intellectually equal, we will never be equal.  So while we are equal now from a sporting perspective in the physical sector, intellectually, which is what management is about, we still are considered not good enough.  That is why we don’t see many black managers,”

Mr. Barnes said.  He remembered the racist taunts when he played football in the UK in the 1980’s, but he is confident changes have occurred and will continue.

Mr. Barnes’ work with the clinics has moved on to Antigua and three other countries, Surinam, Trinidad and Jamaica.  St. Kitts marked the end of the first half of countries to be visited.